Now we're pretty sharp and on the ball, but sometimes the planets align (along with Harry's mojo) to throw us a curve we can't deal with. Today was one of those days. Harry, in his wisdom, booked Mr. H and Mr. S in with their red 2000 Ford Windstars on the same day. Both needed an inspection. Both had engine control problems (same problems by the way). Both were a quart low on oil. 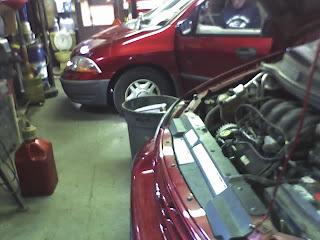 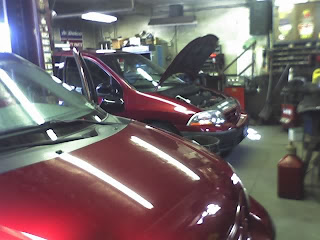 Click pis to enredden. Sorry about the quality, I took 'em with my phone.

We forgot if we did the safety part of the inspection on one or the other. One of 'em also needed a new wiper motor. Almost put the new one on the wrong car. Writing up the bills later, we forgot which one we did what on. Oy, what a fucking day. We told Harry that if he ever does that again we were gonna shoot his ass.
Posted by Fixer at 5:56:00 PM