As folks who followed our trip to the Baltic know, I ran into my buddy "David the Engineer", formerly the 1st Engineer on Queen Elizabeth 2 and now with Carnival Corporation Fleet Division. He was doing surveys on Holland America Line's Prinsendam and then on Queen Mary 2 the same time we were aboard. Much beer was consumed. Heh ...

That said, he gave me some of his personal pics of Cunard's Queen Elizabeth 2 and Queen Victoria in rough seas as they chased each other across the North Atlantic for Vicky's New York debut, a couple years back.

My buddy Dave was aboard QE2 and his buddy was an engineer aboard Vicky and they took these pics while texting each other in real time. From what he related, the texts went something like this:

Vicky to Lizzie: "You're a dragster."

Lizzie to Vicky: "You're a submarine." 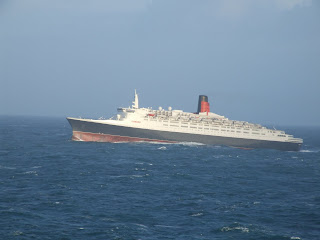 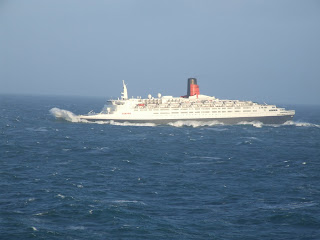 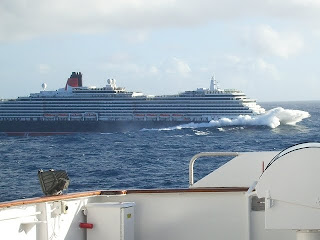 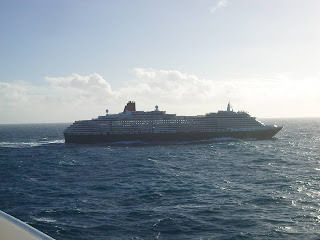 It was nice to have a mate to hang with at nights and catch up on sea and car stories. We also have a mutual friend so we got to say bad things about him because he wasn't there to defend himself. Heh ...

This is for Comrade Misfit, who knows a good ship when she sees it. Queen Elizabeth 2 and Queen Mary 2 at Pier 92 on NYC's West Side. My buddy Dave took this pic from the Empire State Building. 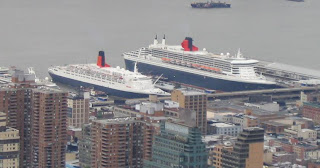 Thanks for posting these great shots!
I was actually aboard the QE2 for this trip. We felt sorry for the soggy folks of the Queen Vic! That was a fun and memorable trip!
And, believe it or not, the pic of QE2 and QM2 at the end of this post: I was there too! This was April 22, 2004. The two ladies met up in Manhattan after QM2 had completed her Maiden Transatlantic Westbound crossing. Later that day, amidst great fanfare, both ships slipped out into the Hudson together to begin the very first Tandem Crossing and the Mary's MaidenTransatlantic Eastbound crossing. At the conclusion of this trip - in Southampton - Cunard's silver Boston Cup was transferred from QE2 to the Mary, officially hailing the QM2 as Cunard's new flagship! That was the greatest trip of my life and I shall never forget those days onboard Queen Mary 2!