First, a coupla words about last week's AHRMA Donner Summit Trial. Then it will thankfully disappear down the memory hole if I have to tamp it like a muzzleloader.

This was a real vintage event. There were some terrific old trials bikes there. Many '50s and '60s BSAs, a coupla '60s-ish Ariels, and one rigid frame '47 Matchless that looked like it just came off the showroom floor. The Japanese brands were well represented by some '70s trials models. My '87 Honda may well have been the newest machine present.

I was watching as one of the '50s BSAs took a tumble. You could almost hear the crowd gasp, as in "Oh no! Don't dent that beautiful aluminum gas tank!". Hey, ride it, risk it. They were meant to ride rather than sit in some collection somewhere and never get the tires dirty.

AHRMA does things different than my club, SactoPITS. They had me ride the 3 line, a step above my usual class. I sucked. I only fell off once, but I caught the palm of my right hand next to the last two fingers under the end of the handlebar. I didn't notice it much until the next section when I realized I didn't have a very good grip on the handlebars. Bad grip = bad juju. Combined with the difficult course which had kicked my ass into exhaustion in only eight sections and I decided to call it a day. I didn't complete a whole loop, of which there were three.

Bad day. No fun. Pain. The next day, my hand swole up pretty good and the last two fingers were useless. You don't think too much about it, but those two fingers are pretty useful. Until they're not. I had to learn how to flick my Bic with my left hand, and writing checks was a painful chore.

The swelling mostly went down by today, but I still can't extend my hand completely. It was OK for holding the handlebars but shaking hands or getting helped to my feet with it simply wasn't on.

The Hard Rock Trial today was a blast! It totally made up for last weekend's debacle. I rode fairly well and for the first time in my trials career never fell all the way off. A milestone! I can pretty much predict that won't hold up. Heh.

Mrs. G took some video clips and I ran 'em together for another short video. She discovered the 'wide/tight' button as you will see. She covers a lot of irregular ground on foot to get these and takes almost the same chance of getting bruised up that I do, and she does from time to time. Thank you, honey.

The course today was laid out by Brodie Bill who is a master at it as far as I am concerned. Some of the 4-lines were easy, but some were challenging for me but makeable, maybe not on the first attempt. I rode 3 loops of seven sections and got 12 'cleans' and 27 points and the trophy for being first-and-only in class. I sold one of my Reflexes a coupla weeks ago to a new friend who would have been in my class but he has the flu and didn't show up.

In the vid you will see me flame out ONE FOOT before the end of a section and do a backwards plotz. My second try went better and on the third try I stopped and rolled backward again (without falling), but the scorer said my front axle cleared the section first so he gave me a clean. I think he was just being nice. I'll take it, though!

In another clip you'll see me put my foot down for balance (called a "dab") and the scorer holding up one finger signifying one point. I never did clean that section and you'll see me sit it out and make it through without stopping for a 3. Stopping, which includes falling off, gets you the 5 max.

When my run was done, I felt great. Tired but happy. Ever the smartass, I told a coupla people that my favorite section was section 9. They looked at me funny and told me there were only eight sections, which was correct. I told 'em it was on a new section of between-sections trails that Mr. Bill had blazed, and consisted of a coupla hippie-lookin' gents stirring something in a big steaming pot that they laid me out a big gagger of that got me through the day. I'm not exactly sure how that went over. Heh.

Please enjoy. Also, there's a nice pair of legs in this that are not on a male scorer. :-)

Watch this video of Saturday's Section 1 from the vantage point of a 2-line rider. A lot harder than the line I rode. 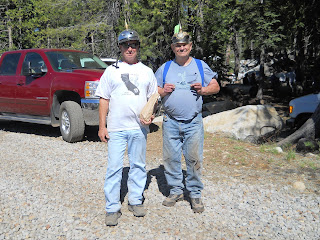 Next up will be the AHRMA Donner Summit Trial in two weeks. My 25-year-old bike will be one of the newer machines at that one and I'll probably have to ride a "Modern Bike" class. Stay tuned.
Posted by Gordon at 1:57:00 PM 8 comments: