Someone please hit the "OFF" button.

In the thirty plus years I have been turning wrenches, this is the ultimate example of stupid people who have a license to operate a motor vehicle.

From an Email I just received, these are not my words because they have too many letters in them for how I would be describing this nightmare.
I can only hope that this complete moron was charged 75 dollars to diagnose this obvious problem and then FOUR HUNDRED dollars to cut this giant birds nest off of his drivetrain.

This guy ran over a mattress and decided to keep going. The ensuing jumble finally whipped around enough to put a tear in the gas tank, the subsequent lack of fuel is what finally brought this vehicle to its knees.

It had still managed to drive 30 more miles decently with a 60lb tangle wrapped around the driveshaft.

This genius complained that the vehicle had a "shimmy" when driving at high speeds. 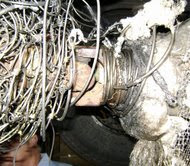 Someone give this idiot a bus pass.
Posted by Phil at 1:06:00 AM No comments:

Oddball Old Crock of the Week

No, for once I'm not referring to myself. This is a 1929 German Triumph 500cc Side Valve single, or 'flatinzeehead' if you prefer. Note the hand gearchange and exposed valve gear. The muffler musta fell off back there somewhere...

When the sidewall of the right front (curb feeler) tire on your Caddy looks like this, you ain't getting an inspection sticker. Don't argue with me about how good the tread is, you cheap fuck. You're buying a tire. 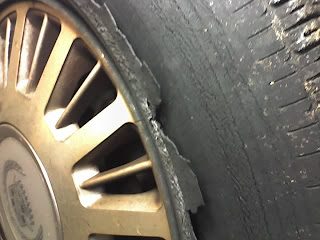 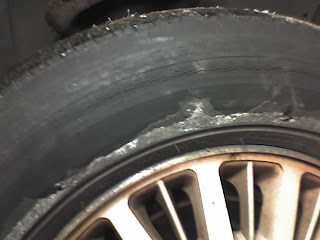 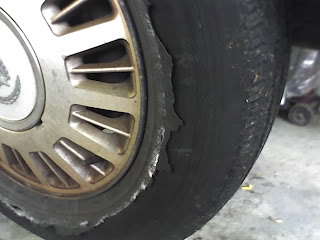 OK, now somebody in Detroit needs to explain to me why there aren't thousands of these being built every day.
I don't want to hear about crash tests and air bags, I want to know why we can't have a small runabout town car that has half the horsepower and the simplicity of plugging the damn thing in to go get groceries that this vehicle obviously has.Yes, it isn't cheap, no, there is no good reason not too.
At this point, after GM and Chrysler have announce they are shutting down for a month, why the hell not do this and jettison the money losing vehicles they are trying to keep foisting on the American consumer?

Reality is a bitch boys, get with the program, this is really making you look bad.

One of my all-time favorite Ford models lights 'em up!

Go see this one too. I wonder what all the guys in the trunk were thinkin'!
Posted by Gordon at 2:32:00 PM No comments:

Yeah, right. Had this fucking Chevy Avalanche in today. Inspection, service, and I spotted the front brakes were thin when I inspected it so I sold the guy pads and rotors. 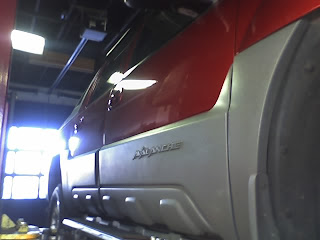 Well son of a bitch, I was cursing General Motors all morning. An easy brake job (shouldn'ta taken me more than 20 minutes) turned into 2 hours.

Usually, I pull the caliper bolts, compress the piston with a small prybar, pop the caliper, pads, and the mount, get out the big brass hammer and give the rotor a whack, pop it off and then reverse the procedure with new parts. About the time I gave the rotor a whack, I knew it wouldn't be easy. I could swear I heard the damn thing laughing at me. I hit it again, and again, and again, and again ... Got out the torch, heated the fuck out of it and hit it again. The laughing got louder and it still didn't move.

Seems GM has a very close tolerance between the inside of the rotor and the wheel hub (Ford does this too on the Expeditions). In areas where road salt is used (like here on Long Island), the inside surface of the rotor rusts to the hub. No matter what you do, you ain't breaking it loose ... until you break out the Sawz-all. 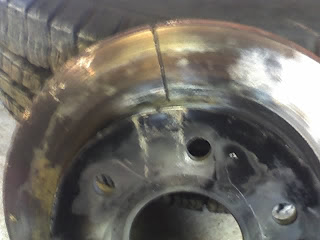 I sliced the rotor down to the hub, squirted everything with penetrating oil, and then beat the fuck out of it some more until it let loose. Hadda do the other side the same way. Notice the rust ring around the outside circumference of the hub, just outside of the wheel lugs. 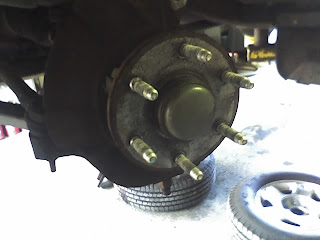 So, being a guy who looks long-term, before I put the new rotors on I sanded and gave each hub a coating of adhesive copper grease to prevent this problem for the next guy (me or Nunz probably) who services the brakes. 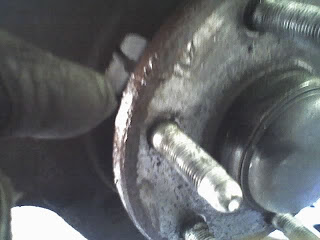 Like I said, this ain't indigenous to GM, just the latest crap I had to do this on. Ford is just as guilty of this poor design and it makes you wonder, after a hundred years of building cars in the United States, how simple engineering fuckups like this still happen. Once again, there's no surprise these guys are on the balls of their ass.
Posted by Fixer at 6:39:00 PM No comments: