What The Hell Was Fixer Doing In Florida?

Just kidding, Fixer would have brought it back in one piece. 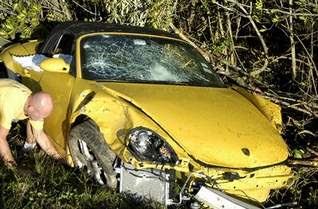 Routine maintenance on a 2008 Porsche Boxster took an unusual turn Thursday, when a Sanibel mechanic took the car on a wild test drive, reaching an estimated 163 mph, and crashed it.

Kenneth Kasten, 50, owner of the Sanibel Shell service station, was driving the Porsche on McGregor Boulevard near Punta Rassa Road at 6 a.m. when he lost control and flipped the car into some mangroves, according to the Florida Highway Patrol.

The Porsche - owned by Nanelle Wehmann of Sanibel - was the only vehicle involved in the crash, which occurred in a 55-mph limit zone.

Kasten wasn't seriously injured and left the scene before emergency crews arrived, Cpl. George Kantor of the FHP said. Alcohol is not believed to have been a factor in the crash.

Authorities arrived on scene to find the car smashed, abandoned and upside down.

Initial reports were that the car was stolen, but Kantor said it quickly became clear that Kasten had permission to drive the car.

Wehmann said she has been bringing her vehicles to the Sanibel Shell for years and was surprised to learn about the crash.

Kasten was found a few hours after the crash hiding in a nearby parking lot and was given a notice to appear in court on charges of willful and wanton reckless driving and leaving the scene of a crash.

I once took a Lincoln Mark 8 on an extended test drive and hit 135 before I backed out of it, that was way fast enough for me.It was raining a little and the front end was starting to float.
The guy kept bringing it in bitching about a howling noise around the top of the windshield at high speed and no one could duplicate it because when he said high speed, they figured seventy miles an hour.
I finally talked to him and he said no, it started in around ninety.

I glued the shit out of the seal at the top of the windshield and never saw him again.
Posted by Phil at 3:45:00 PM No comments:

I remember Cruise Nights on Van Nuys Boulevard. They were fun to go watch. I never got in any trouble or saw much of the stuff that made the cops shut it down. I'm glad it's back, even as a shadow of its former self. That's probably a good thing.

By the way, the photo in the article shows a '62 Chrysler Newport, which none of us would've had up our ass in those days if we'da had room for a boxcar, but I guess anything old is cool now. Hmmmm. Some of us 'old stuff' have been so cool for so long that it's just a given and nobody even notices anymore...

As the souped-up muscle cars, restored classics and lowriders cruise through the old Rydell Chevrolet lot on Van Nuys Boulevard, Reid Stolz takes stock of a scene that was familiar to anyone growing up in the San Fernando Valley a generation ago.

Here's the crux of the biscuit right off the bat:

"Remember when we were young and the cops were old?" said Stolz, 51, watching an LAPD patrol car glide by. "Now the cops are young and we're old."

After a 28-year break, Stolz and other car lovers have brought cruising back to "The Boulevard," though the drivers are now more likely to be middle-aged guys with graying hair and grandkids, driven by nostalgia rather than teenage vanity.

Yeah, how much trouble are a buncha old farts gonna cause anyway? Wait'll me an' Fixer an' Nucks show up...

It was more than just a scene, it was an iconic ritual that was imitated, written about in hot rod magazines and captured on film. Cruise night came to represent a Southern California lifestyle that young people in the Midwest and the world over could only read about. Cruising the boulevard on a Wednesday night was about adolescent freedom, a sense that anything was possible and, above all, fun.

Back then, young people just showed up every Wednesday night. Girls and boys by the hundreds milled on sidewalks as candy-colored cars blowing rubber smoke streaked by blasting Led Zeppelin and Pink Floyd from eight-track stereos.

Led Zeppelin? Pink Floyd? 8-track? Holy crap! I went to those Cruise Nights waaaaay before that! Beach Boys and Bobby Rydell days! On AM radio.

I must be older than I thought. Sigh.

The tradition dates to the late 1950s when high schools in the San Fernando Valley held club meetings each Wednesday, said Jon Billesbach, 67, of North Hollywood.

Youths in car clubs would head to the boulevard after the meetings ended for street racing, he said. Later, everyone gathered at the Bob's Big Boy restaurants in Toluca Lake or Van Nuys.

Cruising reached its zenith in the 1970s, and the boulevard was its own teenager universe.

There were a lot of people older than teenagers, trust me.

Streets lamps bathed the bikers at Arby's in an arc of white light. The van guys parked outside the Heads 'N Highs head shop and the street racers converged at Bank of America. Latino youths parked their lowrider at the June Ellen Doughnut shop, just south of the 101 Freeway, Stolz said.

Here we go again - there weren't even any head shops when I went. There aren't any now either, although there may be again. Full circle and then some, I guess.