Yesterday me'n Mrs. G went up to Portola to visit with our friend Steve Storz and watch his sons demonstrate trials riding at the annual Portola Railroad Days shindig.

The 50-mile drive up there was pretty uneventful except for about one second of stark terror. A doe ran across the road in front of us. If she'da waited another quarter of a second, we'da had venison for lunch, car service. It was all over before my reaction time let me do more than lift my foot off the gas pedal. It was close enough that I looked for hoofprints on my pickup later. Whew!

We caught up with Steve and the boys at the local skate park (video with me 'n Steve discussing the day) near last year's venue in between shows. The demo area had been moved to a vacant lot right downtown so we moved our rig over there and watched the show and visited. "Downtown" is sort of a relative term. Portola ain't New York City. The main street is off the highway, so it wasn't much of a problem for them to close off the street for the Railroad Days event. If you were driving down Hwy 70 you'd have to get really creatively lost to find it!

Here's Eric Storz doing a show. You can see Mrs. G wearing a red T-shirt. I was wearing a Storz Performance T-shirt and had been seen canoodling with Steve, so for all intents and purposes, I was sort of a quasi-official member of the team. One of the Railroad Days staffers saw her standing where she was, sort of off limits to the general public (or the sane!), and asked me if she was with me. I said yes, and that she had been run over by motorcycles lotsa times (true) and not to worry. Heh.

Things don't always go as planned. In this one, Demo Team member Ian Delaney does something that probably wasn't in the script:

Of all the things motorcycle riders want to be famous for, that wasn't it, but folks all over the world will see that one! Heh.

He wasn't hurt, still being of the age where he's made out of rubber, and it probly worked out pretty good, all things considered. The Demo Team is sponsored by Ryan Young Products, which is the importer of the Shercos the Storz boys ride, and Ian rides a Montesa. I can see Ian's picture with his sled on top of him in the ad now - "Don't let this happen to you! Ride a Sherco!"

The show was very popular and the lads spent some time autographing posters for the spectators afterwards. We stuck around long enough to watch 'em load enough gear in Steve's F-150 to make a gypsy proud, and they lit for home and so did we.

There's some more videos of the Demo Team at my YouTube Channel. The Portola setup wasn't as video- or spectator-friendly as it could have been (Steve said that setting it up was like watching three women rearranging furniture), but nobody seemed to mind. Here's a much better video than mine that Steve took at a Demo show at Moto Expo in Del Mar last year:

Me'n Mrs. G had a great time. Steve's kids and their friend Ian are fine young men and solid trials competitors with great futures in the sport. We feel fortunate that they come this close to us once in a while so it's easy for us to go visit. The video camera is icing on the cake.

Oh, yeah, we stopped at Los Dos Hermanos on the way home for enchiladas rancheras and chicken fajitas. The perfect end to a perfect day.
Posted by Gordon at 1:18:00 PM No comments:

Real good, but who's gonna buy the fucking thing?

General Motors announced on Tuesday morning that its Chevrolet Volt extended-range electric car had delivered a fuel-economy rating of 230 miles a gallon — which sounds outrageous. With that kind of gas mileage, you could practically drive from Los Angeles to Las Vegas on a single gallon of gas, or for around three bucks.

Of course the range on pure electric power is about 40 miles, and then the gas engine kicks in to keep the battery up. That's fine, it's still pretty economical and most people drive less than 50 miles in a day, so driving it should still be inexpensive.

I'd like to know who can afford to buy one with a price tag of $40K?

Honda, Toyota, Ford, and Chevy make hybrids (I'd stick to the Japanese brands if you're in the market) a lot cheaper which are also economical to buy, drive, and repair (something unknown about the Volt). The Chevy Volt is nothing more than a cachet vehicle; something with which the well-to-do can show off their 'greenness'. Hopefully, GM will use the technology to make small sedans in the $12 - $15K range that will be more accessible to the masses. Thing is, as GM has done for the last 30 years, it looks like they've already missed the boat:

Team Nissan is referring, of course, to the electric vehicle in the photograph above (and the video below). The LEAF, which will go into production next year – with a tentative release date of 2012 – is expected to be much cheaper than the Volt. How much cheaper? Nissan isn’t saying. Wired, for one, thinks the cute-as-a-button car could come in at $25,000 – some $15K cheaper than the Volt.

Toyota has had electric vehicles for the better part of the decade and Honda is also producing their own version. It's probably a safe bet the Japanese will do them better.

And if you do want to spend a lot for an electric, Herr Daimler has a car for you:

FRANKFURT (Reuters) - Daimler plans to roll out a Mercedes-Benz model that runs on electricity in 2010, its chief executive said in a newspaper interview.

"We plan an electric Smart for 2010 and for the same year a Mercedes (electric) model as well," Dieter Zetsche told Frankfurter Allgemeine Zeitung in comments to be published in the Saturday edition.

Daimler currently has in London a fleet of 100 first-generation Smart cars that run on electricity.

I'm sorry to say, as reports have claimed, that if GM has staked its survival to the Volt, there won't be many sunny days ahead.

Cross-posted at the Brain.

Mad Max to the nearest white courtesy phone, your truck is here. 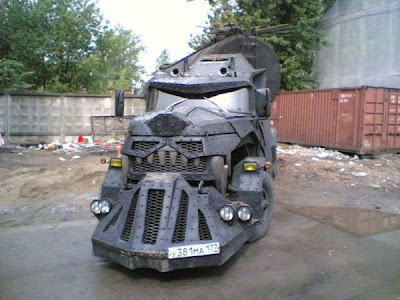 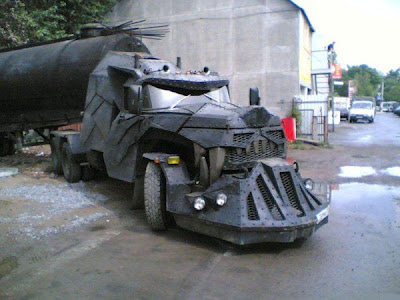 I wouldn't want to see this thing in MY rearview mirror!

Pics courtesy of English Russia, they have some very cool stuff there.
Posted by Phil at 12:30:00 AM No comments: