Customizing: The Disease Creeps In...

Well, I've had my Royal Enfield for fifteen months now, and it's been stock for too long. I added a set of OEM accessory leather saddlebags, and they look nice and work fine, but that was for utility. It's time to start making it a little different. Gotta start somewhere.

I got my Royal Enfield Online Store e-flyer a coupla weeks back and they had an aftermarket Ace Air Canister* air filter that reached outta my monitor and grabbed me by the stackin' swivel. It came on the big brown truck yesterday.

*While I was gettin' that link I wrote a short review of the product. They 'accepted it for moderation'. We'll see if they print it. It was generally favorable. 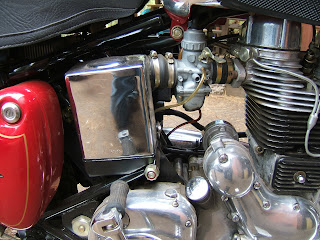 It took about two minutes to peel the stock parts out, and then I discovered, cleverly hidden out of sight - oh, the horror! - the most terrifying oxymoronic two words in motorcycling to come so close together: 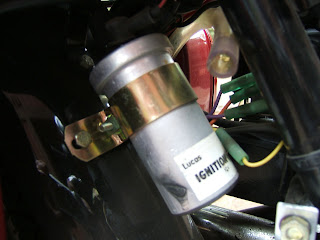 Note to Lucas: Put the lawyers back in the box. I kid...

It was a pretty straightforward swap, although I did have to re-engineer the new bottom bracket a little. The canister missed it by about half an inch. 'Re-engineer' is a pretty high-falutin' term for grabbing the little aluminum strap with a Crescent wrench and tweaking it sideways. 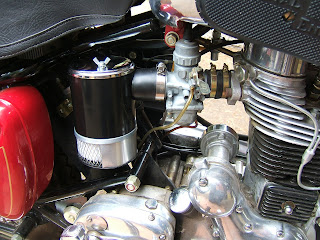 I plan to replace the mickey mouse-lookin' wingnut on the top with a nice chrome dome nut. Clear the decks, Mountain Hardware, here I come! I could probably get one on my next trip to the Buell dealer, but I'd rather pay one dollar than ten. Heh.

Its makers claim that the air filter will increase performance, but frankly I doubt it. It probably won't even increase intake noise, as underpumped as these stock engines are. I have a replacement for the next part in, the one between the air filter and the cylinder head, that may in fact hop it up a little. Then there's that muffler...an' that barely bumpy li'l camshaft...an' those clogged-up as-cast ports...an'... More on all that as it develops unless they find a cure.

The Ace Air Canister looks real good. I think bikes should have round lines instead of square ones just like women, and for me this product does that.

The new air filter actually does increase the performance a little. My seat-mounted jeans-encased dyno doesn't print readouts, and you wouldn't want one if it did, but I can feel better acceleration and the exhaust note is slightly crisper.
Posted by Gordon at 5:33:00 PM No comments:

I just got my weekly email from Ford Racing (still keep my finger on the pulse) and the photos of the 2010 Cobra Jet Mustang at the track are out. The engine makes me drool. 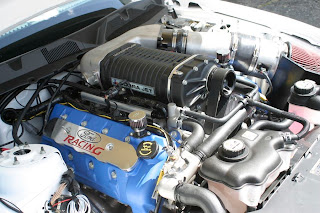 Looks like they had to lube the shock towers to slide that motor in there. Heh ... More at Ford Racing.

First kick? No, they all start on the last kick...

I got this post from this blog. This is probably some corollary to Murphy's Law:

Royal Enfield motorcycles delight in making you look like a fool in front of friends, loved ones, and, especially, attractive members of the opposite sex. How does an inanimate object know that, instead of merely trying to go someplace, you are trying to show off your ability to kick start a mighty beast into life?

I don't know. But my Royal Enfield Bullet knows. To foil me it has moved its own kill switch into the "off" position, and developed instantaneous fuel starvation or flooding.

The fortunate thing is that when the friend, loved one or attractive person gets bored and wanders off, the Royal Enfield will cheerfully return to full operational duty. It's not disloyal; it just wants to keep you humble.