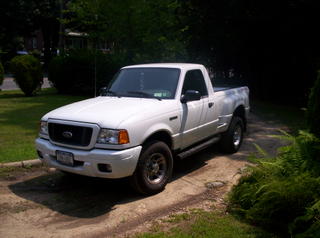 Well, I bought this thing about 13 months ago and I'm just coming up on the 15,000 mile service. So far, so good. It's is fun to drive, very, and has better get up and go than a V-8 thanks to the 5-speed standard transmission and the 4.10:1 rear end gears (I can leave rubber on the first 3 shifts). It also handles like a sports car thanks to the suspension and 2 wheel drive. I call it my undercover mid-life crisis because I don't look like an old guy in a little sports car. (Mrs. F to old guys in little red sports cars: 'Sorry to hear about your dick'.) Only one drawback, it sucks in the snow. But this fall, I'm actually gonna spring for snow tires and throw a couple hundred pounds of sand in the bed. Either that or do what I did last year, drive the Mrs.' Explorer.

Just for info. Ford calls for a blended synthetic 5W-20 motor oil. I however have been using Mobil-1 0W-30 full synthetic and have had zero problems. No wear yet (I use a magnet and cheesecloth in the stream when draining the oil and have yet to see any visible wear metals). Trust me, this thing does not get babied. Aside from a daily 90+ mph run home, I use it for road calls and chasing parts around town. I am truly impressed with the vehicle and will probably trade it in (in a couple years) on a newer version of the same.

Don't use comments until further notice. I haven't set up Haloscan yet. I'll do it this afternoon and all the Blogger comments will be lost.

I'm testing out this new template. Pardon the mess.
Posted by Fixer at 7:36:00 PM No comments:

This is not me:

Richie Wood escaped by running into a marsh, prosecutors say, but this time he couldn't run away fast enough. Mr. Wood will be arraigned on charges that he and other suspects stole a gold chain and a wallet from a passenger on the A train Sunday night.

Police sources say Wood and his friend intimidated the victim with a gun at the Grant Street station in East New York, threatening him with the weapon until forcibly grabbing the goods and running. He was arrested about 45 minutes later.

Police say the victim in this case was able to follow his muggers and point them out to police. Also Mr. Glen Moore, who suffered a fractured skull, is apparently doing much better. He's been discharged from Jamaica Hospital.

I been hearing shit about it for 2 weeks now. I'm not a criminal and I'm certainly not that stupid.
Posted by Fixer at 5:41:00 AM No comments:

As many of my readers here and at Alternate Brain know, I work in a small shop on the north shore of Long Island. There are 4 of us working (see the lineup in the sidebar) but we also have a regular cast of characters who show up on a regular basis. They come, hang out, get coffee, bullshit, and then leave. At any time of day at least one of 'em is around.

Joe and Ma: Joe owns a tree service . . . well, Joe is the tree service. When he needs help, he heads into Glen Cove and picks up a couple illegals for the day. Ma is Joe's dog (a 13 year old Pit Bull with eyes that look like Marty Feldman's) and adult supervision. Joe has about 10 pieces of equipment (bucket truck, dump truck, etc) but no place to park them so he leaves them in parking lots around town overnight. Inevitably, one of us is giving Joe and Ma a ride somewhere in the morning to get one of his trucks. I dropped them off at Burger King one morning where Joe left the bucket truck the night before. Ma was in heaven.

Franz the Kraut: A pain in the ass old German who has too much free time and knows everything. Reminds me too much of my old uncles, but I do keep my German fluent by practicing with him. At least once a week I'm telling him to 'shut the fuck up before I slap the old right outta ya'.

Bob the Admiral: The dried up old squid who lives across the street from the shop. He was blown off a destroyer during WW2 by a Kamikaze and spent like 4 days in the water before they found him. He sits on his front porch and watches all the women go into the Post Office (next door to the shop). The crusty old geezer yells at us across the street and gives us the finger. We yell back for him to get off the porch, he's scaring the children.

Grumman Dave: Former still photographer for Grumman Aerospace until he retired a couple years back and now has too much free time. His wife sends him up to us when she's had enough of him. Unlike the three above, he actually is a customer and has been for 30 years. That's why we don't tell him to get out as quickly as we do the others.

Clyde: Retired Nassau County cop. Works part time playing carpenter. He stops by in the evenings so he can drink beer before going home to his wife.

Jeff the Pimp: A brother who went to school with PDB. He thinks he's a big pimpin' playa but he ain't got two nickels to rub together. It's fun to watch the looks women give him when he lays his line on them. One of his favorites: 'Wasup, breakfast?'.

Shanghai Johnny: Chinese immigrant mailman who is fascinated by cars. I'm the only one who can understand him.

Kommissar John: The New York State legislator for our district. Republican, spitting image of former Connecticut governor (now convict) John Rowland. An asshole extraordinaire and I tell him every chance I get. He usually checks to see if my car is in the lot before he shows up. Tries to avoid me like the plague but his local office is line-of-sight from our door. Try to guess how many times I've mooned him. Yes, the locals are used to driving by the shop and seeing me in the lot, mooning somebody up the block.

So, aside from all the crazy shit being an in-demand mechanic entails (we're always busy, no comebacks) we have these clowns to put up with. But that's what makes us unique. It's a garage plucked off of Route 66 fifty years ago and dropped on Long Island. I wouldn't work anywhere else.
Posted by Fixer at 4:25:00 PM No comments:

I broke my finger today working on this piece-of-shit Subaru. That started the day off well. I reset it and taped it up and went on a road call to get one of our customers' cars that wouldn't start. Ran down to the IGA in town to find it was her husband's car and she didn't realize it had an alarm in it (Huh?). Once I reset it, it started. Oy! I get back and Harry sends me out again. Old guy runs his fat Lincoln off a 12 inch high curb. "Oh, it just has a flat tire," he tells Harry. When I get there it has 3 flats, he just saw the one on the driver's side. I pack him in my truck and call for the wrecker before dropping him at his house. I just put 2 new tires, ball joints, and swaybar links and bushings in the thing last month. He's gonna need new ones again along with more shit. Another old guy who shouldn't be driving, but that describles most of my customers. Then I had to deal with a guy with his Goddamn Sedan DeVille who's got a transmission torque converter malfunction that the body computer is seeing. This means, he can't get an inspection sticker. He's pissed at me because he doesn't want to spend $2200 to get the thing fixed. He's called Albany and the DMV and they tell him the same thing I do. He has to get it fixed. He says he shouldn't be forced to pay that much. I say, if you own a luxury car, be prepared to pay more for parts if shit breaks. If ya can't afford the parts, maybe you should be driving something that's cheaper to maintain.
Posted by Fixer at 3:33:00 PM No comments: