This sign hangs in my shop. I just ran across the file for it and thought I'd share. 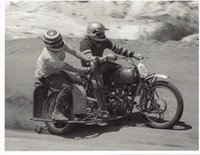 I guess we've all heard about Guv'ner Ah-nold leading with his lip in a sidecar crash. Why not? He leads with his lip everywhere else...but I digress.

Anyway, I've read in blogs and elsewhere a lot of ignorant gibberish about sidecars in the wake of this incident. The most notable was a comment somewhere impugning the masculinity of sidecar drivers. Drivers, not 'riders'. Horse pucky.

I decided to set the record a little straighter as I have a little experience with "outfits" or "combinations", as the British call them. I've ridden outfits ranging from a '27 H-D JD with factory sidecar to my own '58 Ariel Square Four with a Busmar "double adult saloon" chair. That was a fully enclosed model with fore-and-aft seating for as many adults as you could cram into it. I once set up a Harley-Davidson for Willie G. Davidson to ride the Muscular Dystrophy poster kid around in. My Service Manager told me to "add lotsa extra lights. We don't want the kid to get killed!" Heh. I have many more sidehack stories...

The photo at the top of the post shows me doing a little research on the subject. The driver is my pal Larry. He was strong and fearless. I'm the 'monkey' and all I had to do was throw my weight around and hang on for dear life. It was fun, but very strenuous. The bike is a 650cc Triumph Bonneville, and it was fast. It was a little squirrelly too, but Larry only paid $200 for it, and could run with custom-built jobs that cost a lot of money. We beat some of 'em, too. Note the attempt to lengthen the wheelbase by use of a trailing-link front fork from a 250cc Greeves! Note also the custom "clearance" grooves in the gas tank. Perhaps one good tank-slapper did that? Who knows? Hey, whatever works. The picture was taken at Perris Raceway in California in the late '70s.

Sidecars date back to about ten minutes after the first solo bike rider's wife had a baby. They were considered family transportation in an era when most guys could afford a bike, but not many could afford a car. As cars became cheaper, sidecar use diminished as most wives prefer for them and the kids to ride inside something warm and safe.

The first sidecars were made out of wicker, hence the expression "chairs" for them. There were many variations on the 3-wheel theme. There were "tri-cars" with the chair mounted between two front wheels, the driver behind. In a crash, the passenger got there first. These were especially popular amongst guys who got to ride mouthy mothers-in-law around. God only knows how far they could make 'em fly by hitting the brakes real hard.

Sidecar rigs are very popular today in third-world countries and places like Siberia and China, where they are not only family transportation but also used as a means of power take-off to run water pumps and the like, anything you can run with a coupled shaft or a belt or whatever. Just think of Tod and Buzz running a water pump with their Corvette in Route 66 and you get the idea.

Sidecars in this country are mainly used by dyed-in-the-wool enthusiasts and folks with limited use of their legs. There are aftermarket sidehacks for nearly every model of motorcycle. The only currently available factory combo is the Ural from Russia, although I expect the Chinese copy of this Russian copy of the WWII German rig to be here soon.

A few words about driving a sidecar are in order here as I feel this may have had something to do with Ah-nold's prang. These things handle like neither motorcycles nor cars. You almost cannot turn one of the damn things with a steady-state throttle. In this country, the chair is usually mounted on the right side of the bike. This means that to make a right turn, you must accelerate the bike around the chair, or brake the chair, or both. To make a left turn, you must decelerate, or brake the bike, or both, so the chair will be going faster than the bike and want to turn. You can get real creative with all this. If you don't know how to do this stuff, pick your spot and try to hit something cheap!

Sidecar rigs are specially set up, too. The sidecar axle must be forward of the bike's rear axle. The chair's wheel has to toe-in for steering and lean outwards at the top (positive camber?) to compensate for passenger weight and the crown of the road. My old Ariel had the chair on the left and it always seemed to be pining for Jolly Olde England and trying to turn towards home. I'd pour malt vinegar on it and it'd act OK for a while. Also, the front end requires more rake so as to slow the steering and lengthen the wheelbase. Harley-Davidson made the capability to make this adjustment a standard feature on its larger FL models until just a few (to me. Ha!) years ago. They also offered a gearbox with three forward speeds and reverse.

If anybody thinks sidecars are for girly-men, go find one and get a ride in it. A racing one, if you can. Then, if you still wish to run your mouth, fine by me.
Posted by Gordon at 5:37:00 PM No comments:

I'll be taking a hiatus from this blog for a while. Explanation.
Posted by Fixer at 2:16:00 PM No comments: