No, I am not talking about your diet.
I see at least six.

Wait, it could be three Quadra Pukes back to back. 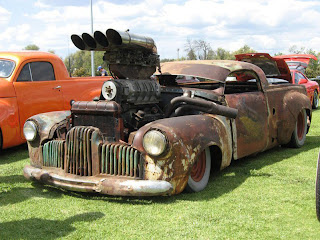 I am obviously positive this is a custom rod but I just noticed the bed and the  top of the cab are married.

I Need A Kick In The Can

I swear, I am the definition of lazy lately.

I have three rigs, all of which are undriveable right now.

The Beast, my 67 Ford 4x4 started crapping out on me last week on my way to work.
I got there finally but it was a hit and miss struggle.
It felt like there was water in the distributor cap.
Spit, sputter, back fire, miss fire, no power and I had to baby it just to get off a stop light, after it warmed up, about two miles from work, it ran fine.

Same thing on the way home.
I parked it and started beating the daylights out of my moms  Pontiac Grand Am.
She is in Arizona for the Winter.
I gotta say, for a V-6, that thing hauls ass.

Anyways, I finally got off my dead ass today and went to the nearest idiot squad, who actually HAD what I was looking for for once and got a cap, rotor, points and condensor for a forty five year old rig.
I came home, got the dang thing under the car port and opened the hood.
I am damn near six foot tall and it is all I can do to see the top of the engine.
I yanked the air cleaner off on my tip toes and messed with the fuel mixture a bit, something that is verboten normally.
Then I snapped the clips off the cap and pulled it off and sure as the pure driven snow, there was moisture inside.
I swapped it out, one plug wire at a time, a lesson learned the hard way years ago, put on the new rotor and fired it up expectantly.

I had a suspicion the timing chain was going to hell a while ago and had cranked the disributor around until the vacuum advance ran up against the hose clamp screw on the bypass hose.
I finally went and got a screw driver and loosened the clamp to rotate it, retightened it and cranked the distributor around as far as it would go.

Presto- Change-O
It purrs like a love starved kitten.
The distributor has to go, it is as sloppy as  some guy named Joe but the timing chain is definitely shot.
Yay.
Back in the day I would be out there until two in the morning, cursing and happy, wrenching away.
Now, I have three rigs that are messed up, don't run or are untrustworthy and I can't seem to find the energy to get off my dead butt to even open the hood on them.
I can't blame this on a mid life crisis either, at 52, I am way past that.
I am just plain tired after working all week, my feet hurt,my left shoulder is so messed up I can hardly turn my head and I just don't wanna.

It's time to pay.
Pay someone else to do this work.
I hate that but I am just getting worn out.
Just like my vehicles.
Posted by Phil at 6:33:00 PM 10 comments:

Yeah, I had to finally switch over to a more modern template and change the comments to make them useful again.
Posted by Fixer at 8:55:00 AM 6 comments:

Beauty and The Beast

I ran into this over at FARK.. It's called The Stretch Boat Limo Van.

It's not a bad idea and if you start at the back and work forward, it is sleek and graceful, until you get to the front. 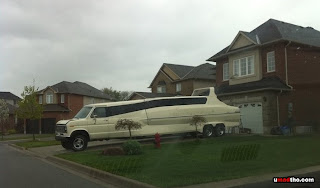 It is like someone grafted Frankenstein's head on to Beyonce's body.

Seriously?
An E350 van nose on such a pretty body?

I have worked on hundreds of those vans and my first question is, WHY?
My second and more pertinent question is just how long and how many thousands of dollars did it take to make that boat anchor waterproof?

This thing is actually supposed to float!
Posted by Phil at 3:46:00 PM 7 comments:

Hey, the heater in my Ford sucks too.

I have to wear gloves because of that cold assed plastic steering wheel. 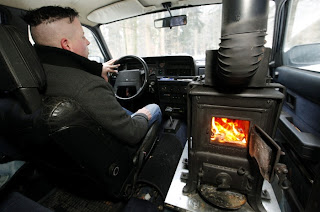 If you have a set and can hang with a pissed off mechanic, you can find it  here,.http://ornerybastard.blogspot.com/2012/02/grrrrr.html
Posted by Phil at 11:12:00 PM No comments:

World's Most Dangerous Sport. Figures they're Germans.
Posted by Fixer at 3:21:00 PM No comments: