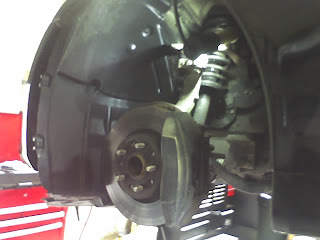 The One World Tour

There are some email lists I don't mind being on. This is a teaser for a new DVD from Choppertown. These guys make niche indie 'sickle and hot rod movies and the one I've seen is pretty good. I wish them all the best.

What happens when two indie directors are given the chance to take the trip of a lifetime? Join filmmakers Zack Coffman and Scott DiLalla on a crazy six week trip as they show their films throughout Europe, meeting underground builders and throwing parties along the way. As they blast through each country they are met by local friends and fans who treat them like long lost family. Part travelogue, part video diary, and part biker mayhem, this once in a lifetime adventure is not to be missed.

More commentary here or click on video after it starts.

The answer to the question posed in the beginning of the video is:

Why, ya put yer dickies in gear and GO of course!

Once again, as I try to pack it in and get out of the damn car business, somebody sticks the Flying Fickle Finger of Fate in my ass.

Yesterday, out of the blue, I was offered a chance to buy a busy shop that's also a New York State Vehicle Inspection facility.

And I'm actually considering it. Meetings this weekend, more when things firm up, or not.
Posted by Fixer at 5:19:00 AM No comments:

Don't bet on the horses.

Seriously, since I'm packing it in, I figured - as I think of them - I'll impart some tips to make 'mechanicing' a little easier.

When I gotta take a lot of shit apart (like this Honda Accord I had to do cam and balance shaft seals on), I try to keep the fasteners for every assembly I have to disassemble, separate. 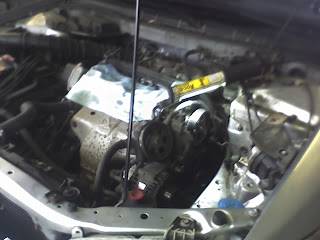 I keep a drawer full of little Ziploc bags for just the occasion. We get stock (nuts, bolts, hardware, small parts) in 'em and I save 'em. As you can see in the pic above, the power steering pump is removed and laid on the side, and the timing covers are off. Those bolts go in a bag. The timing covers, motor mount, valve cover, and any driven accessory I have to remove, all the fasteners from each go in a separate plastic bag. And then I put the bags, in the order I removed them, in my magnetic parts tray that keeps them all in one place while I work on the job at hand. If I just tossed the fasteners in the tray, without the bags, I'd have a pile o' bolts all stuck together. If I piled 'em on my bench and somebody sneezes, they'd be all over the place. This keeps 'em all together and I just pick 'em up (in the reverse order I took 'em out) and install 'em as I put shit back together. Easy and cheap (if you don't have a magnetic parts tray, get one - they'll set you back $15 if you don't buy it from Snap-On - and scavenge the bags from parts or your local dope dealer (Does anyone remember "dime bags"?) Heh ...

Click pics to make bigger. Sorry about the quality but they're from my cell. Ain't taking the Nikon into the shop.

Heh. First trial I've ever been to that wasn't in a courtroom and I wasn't the guest of honor.

This past Saturday we went up to the Donner Classic Trial put on by Sacramento PITS at Donner Ski Ranch, aka "the granite patch", so I could try my hand at trials riding. Try my hand it did, along with every other part of my body both internal and external. I'll get to all that.

I raced my first motorcycle scrambles race in 1962. After a hiatus for my military service, I did a lot cowtrailing and raced flattrack, TT scrambles, dirt grand prix, and my favorite of all, Southern California desert racing and enduros, up 'til 1980 when I moved to Northern California. Since then I've mostly done my dirt riding on the Forest Service roads and single tracks up here in the mountains. I won a few trophies and always thought I was at least a competent rider, if not the world's fastest.

Trials riding is the hardest thing I've ever tried on a motorcycle. There are reasons for this which I will get to in a minute, but suffice it for the moment to say that I cannot remember ever riding as poorly as I did in my first trial.

Part of it is due to the slow speed at which the event is ridden. There's no gyroscopic effect. The rapid turning of the wheels in higher speed riding produces stability, which helps overcome and mask a multitude of sins. Balls and speed will get you to the finish line.

Not in trials. The 'observed' sections, which is where you score or hopefully don't score points (lowest score wins. '0' is the goal.) are ridden in first or second gear at more or less a fast walking speed. The rider has to provide the balance and stability of the missing gyroscopic effect. This is harder than it sounds and takes a lot of practice. Also, the motorcycle has no seat and is ridden with the rider standing on the footpegs. You stand up for bumpy spots in a desert race or on a trail, but you can sit back down. I never thought of myself as a lazy-ass desert rider before, but the standing up all the time business sucks. Mightily, but that's the way it is.

Skill, honed through practice and experience, is what's important in this sport, along with mental prowess. It's a thinking man's motorcycle sport. The riders dismount before riding a section and walk it end to end and plan their line. I did that too, of course, but the best laid plans of mice and men aft gang agley. Heh. I bounced off rocks that I swear weren't there a few minutes before. The truth is I had so little experience that I couldn't tell what was important and what was not.

Speaking of skill and experience, I had absolutely zero. I had only ridden this bike for about forty minutes total prior to the event. I spent hours getting it into shape to ride, but that didn't count. The proof, of course, is in the pudding, which this outing pretty much turned me into.

I promised you the most embarrassing video of me you are ever likely to see in a post the other day at Alternate Brain, but first a word about my good friend Steve Storz.

Steve sorta got me into this (backstory here) and wanted to make sure he gave me all the help he could and rode the event with me. I could not have done this first one without him and for that I thank him no end. As you will see in this video, Steve (orange backpack) followed me like a mother hen. I'm surprised he didn't tell me to go ahead and run over the section check person since I'd already hit everything else I wasn't supposed to. At the other sections he hollered encouragement. More on that later. This is the very first few seconds of my trials career. The good news is I can only get better at it.

The best I can say about that flusterpluck is I didn't fall off or kill anybody.

As the day went on I got a little better at it. I could actually feel myself improving and actually 'cleaned' a coupla sections, naturally out of walking range for Mrs. G and the camera, and therein lies a tale.

The two sections I rode good were more or less straight lines, and since my problem is turning the damn bike, I did OK. One was too easy to feel good about, but one was a coupla hundred feet up a gulch in a watercourse made out of fist-to-head-size rocks. I got to ride up the center of the thing, just a coupla slight jogs. The better riders had to ride up on the sides of the gulch.

At the start I snicked 'er inta low and rared back and let 'er fly. About halfway up I heard Steve yell at me, something like "Keep going!". Like I was gonna stop on my best run of the day! At the top, the checker punched my section card and we had this little conversation:

Checker: "What gear were ya in?"

I was riding the "4 line", which is the beginner's line. The trials folks are the nicest people in the world and the gent was just trying to help me, but I thought it was funny.

Steve and I rode the first loop of eight sections and started on the second. As I was leaving the first section after screwing it up worse than in the video, I started up a rocky path to the next section on a very bad line and hit a rock exactly the wrong way. The bike fell over and I fell somewhat more than 90° from my standing position and landed flat on my back. No damage to speak of, and I'm damn lucky there wasn't a pointy rock where I hit, but it jarred the shit outta me and it took me a coupla minutes to get up. I actually couldn't tell if I was hurt or not and so chose to end my day and went back to the pits and that was it.

I had a swell time. Beatin' the crap outta myself was a lotta fun and I'm gonna do it again. I'm going to practice this until I can do it without looking like a non-ridin' fool. So there. Stay tuned.

Also, I met lots of really nice people and that's the other thing motorcycle sport is all about.

To close this out, here's a vid of Steve who is quite competent at his class level. He took a 4th place trophy.

And one of Cody Webb, who is a friend and mentor to Steve's son Eric and well on his way to becoming this year's National Trials Champion, who shows us how the pros do it. He rode the three loops and 24 sections clean, no points, and won the Master class. Eric Storz got 2d.

There are more videos of the event here, including Steve and myself. If your sides aren't still hurting from watching my first one.

And thanks to Mrs. G for the videos of me and Steve. After showing her how to work the camera, the cat's outta the bag, so to speak, so I have to get better at this. I will.
Posted by Gordon at 12:29:00 PM No comments: