There is a 1978 Corvette for sale that has 13 original miles on it for about fifty grand.
The guy bought it and put it in his barn.
I t is covered in dust and still has the window sticker in it and a gas reciept for seven and a half gallons of gas he paid for with five dollars.

Original down to the factory battery and it started right up.

I don't have that kind of money but I did just trade a 1995 F-150 for an 80 El Camino.
It has electrical issues but I have already traced most of them down to the printed cuircit board behind the instrument cluster that was demolished by some rookie mechanic.

Starts and runs good, has an Edelbrock four barrel and STILL gets better mileage than that damn ford with a straight six.

Kind of a two tone, flat black and grey primer, I call it the Rat Mobile.

Went to a wrecking yard and got an entire instrument cluster that even has a clock in it for 65 bucks.

I should be out there putting it in as I type, it ain't raining but I am going to wait a few more minutes.
Hey, I actually have insurance now.
The things ya gotta put up with when ya get married.

Veteran driver Dan Wheldon, who won the Indianapolis 500 for the second time this year, died from injuries suffered Sunday when his car was entangled in a horrific 15-car wreck early in the IndyCar series' season-ending race at Las Vegas Motor Speedway. The Englishman was 33.

It was a bad day in Vegas yesterday.

Already we're hearing calls to reduce the speed and "make the cars safer". Indy Car is at a place NASCAR was 10 years ago, just after the death of Dale Earnhardt. Hopefully, Indy goes the other way.

NASCAR went the full route, a complete redesign of the cars, in and out, and look what we have now. Nothing more than a spec race (in the vein of IROC or the Barber Saab Series), a tour that's more suited to short tracks than super speedways. You see it now, as cars have to run in pairs just to stay on the lead lap or pass. NASCAR ain't NASCAR anymore. It's been made too "family friendly". Nobody wants their kids to see their favorite driver smeared all over the catch fence.

So Indy Car is at the point now where they have to make a choice. Slow the cars down and bulk them up with even more safety equipment or keep the status quo and let Racing Darwinism come into play. It goes like this.

If the owners don't want to lose their investment, in both personnel and equipment, they'll change the way they build cars. They'll figure out a way to keep them on the track at high speed or they'll continue to wreck.

If they continue to wreck, the good drivers will think twice about crawling into the car.

When they start losing money, things will change. There is no need for a complete makeover. The biggest problem is keeping the cars from going airborne and that's easy enough to do (a gyro and small parachute in the rear of the car - if it goes nose up at too steep an angle and too high a speed, the parachute deploys, dragging the nose back down).

Racing is racing, and people have been dying in race cars since the top speed was 30 mph. When you push the envelope, shit happens sometimes. Pushing the envelope is what racing is all about and when you put limits on speed, you lose some of the appeal.

I'm old enough to remember NASCAR when it was good. When the cars that ran on the track could be bought at your local dealership. Never seen a V-8, carbureted, rear wheel drive Toyota Camry on the road; have you? When you could tell the make of a car without the decals on it. NASCAR's "Car of Tomorrow" all share the same body. So how do they call it "stock car" racing anymore?

Indy Car has a choice. Follow NASCAR's lead and redesign the whole sport or allow the teams to make the changes they feel they need to in order to be competitive and entertaining. Personally, I'm for the latter. Racing with speed limits is neither racing or entertaining.
Posted by Fixer at 6:05:00 AM No comments: 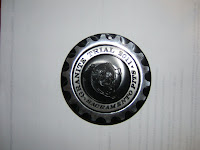 Once again the only Twin Shock Novice 4-line rider, my "Gord made the rope wrap around the tetherball pole! Yay!" award. Seriously, I'm proud of it. Four inches across and a half an inch thick and nicely machined and etched. Its maker said he'd engrave it for me for free if I want. I'm thinking of going with "World Trials Champion". Heh.

Once again, Mrs. G plodded around in the woods for some video. Thank you, sweetie.

1st scene shows me as my own worst enemy. As usual. The delightful and senior-citizen-friendly young lady checker was bound and determined not to give ol' gramps here a 5. I deserved one, believe me. I paddled my way through.

On the next loop I got an honest 3 on this section. On the 3rd loop I fell on two duffs, mine and the forest's. Softest getoff I've had all year. Like landing on a pillow. Got my 5 legit! Finally. Heh. The young lady scorekeeper, who couldn't have weighed 90 pounds soaking wet, lifted my bike off me. An All-American girl, that one! I think that was the only section I couldn't clean at least once in three times through.

2d scene is riding a section in the snow. It was slushy and slippery and I had to put a foot down.

3rd scene shows me riding the "4 line" (beginner/novice) through an easy section. The exit to the check and the scorekeeper were cleverly placed behind a stump. The motorcycle you hear is not mine.

The day went well. The snow didn't matter much. I rode 3 loops of 8 sections for 24 sections, ended up with 21 points and 16 clean rides for my personal best on both. Damn fine way to end the season.
Posted by Gordon at 5:11:00 PM No comments:

This is from yesterday's Vintage-Beginner day of the SactoPITS Boreal Ridge Trial held at the Auburn Ski Club property located at Boreal Mountain Resort (formerly Boreal Ridge Ski Area) atop Donner Summit in the Sierra Nevada in California. 7200' of elevation and just a few yards from Interstate 80. You can see traffic on I-80 at one point.

Thanks to my lovely Diane who walked a mile and a half and clambered up and down rocks to get this video.

In the 1st segment, you can see me hit a rock that was hidden in the grass. I had to use my feet to save it and "5ed out". No glory after that so I just sat and paddled out of the section.

2d segment, I clean an easy section. I'm still a beginner and get to ride the easiest line.

3rd segment, I darn near clean the section but had trouble with a sharp turn at the end. I cleaned it on my 3rd try.

Even when you do it as badly as I do, this sport is big fun!