If you're at a loss for what to do the next time you're in Germany, the LATimes has a few suggestions:

In Germany, automakers are in fierce competition to come up with the most jaw-dropping shrines. Car-loving travelers, come peek under the hood.

And why not? Germany's automakers are locked in a fierce competition - reminiscent of medieval city-states' cathedral wars - to see which can build the grandest temple. For travelers tired of schlepping from one Our Lady of Whatever to another, the German automakers' building spree offers a rich new itinerary - showrooms, museums and tours - that traces the technological triumphs of the Automotive Age, the passion for motor sports, the renaissance of postwar Germany and the cost-is-no-object ambitions of brand-name architects.

Also included are VW, Audi, BMW, and Porsche, with links. What, no Opel, NSU, or
Trabant? Horch? I guess there are some German brands best forgotten.

By all means go peek under the hood.
Posted by Gordon at 1:17:00 PM No comments:

[Over at our political blog, Alternate Brain, we're supporting Dave Mejias for Congress in NY-04. The other day I posted these pics of how I've put up signs and campaign literature in the shop. I figured I'd cross-post here because they're shop-related. Click on the link below for more. - Fixer] 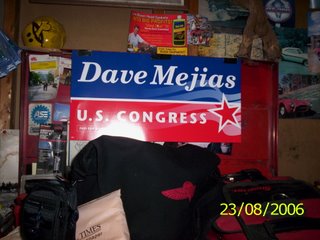 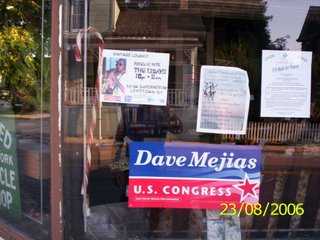 I Dave-ized the shop* this morning.

You know the drill.

Because we've had enough of Peter King**.

*A couple unrelated pics from the shop here.
**Link to State of the Day (thanks, Creature) added after the fact.

Regulars here know how I hate dealing with stupid, shitty drivers on my commute. This morning, Aunty Annti has some commandments for the road. Very good:

3. NO MORE CITY TRUCKS. Y'all know the ones that I mean. Anybody who puts too much chrome, oversized shiny rims, ground effects, air dams or scoops, or sparkly paint & airbrushing on a pickup truck, or even THINKS about dropping it to the ground and using those extremely useless flat tires around the giant rims --- should be pulled off of the road and pantsed in public, so that their teenaged kids won't be humiliated by them anymore, and they will finally have to admit that pickup trucks are not now, nor have they ever been, intended to impress hoochies at the club, nor are they designed to stand in for sports cars or bling-bling. IT'S A TRUCK, GAWDDAMMIT --- SHOW IT THE RESPECT THAT A TRUCK IS DUE, AND STOP MAKING IT LOOK LIKE A LITTLE DRAG-QUEEN BITCH OF A VEHICLE.

Toyota Rules The Road in California

If you've ever wondered as Toyota after Toyota after Honda rolled by on the freeway just how big a lead those automakers had in California, the numbers are in.

In its first published look at new-vehicle registrations in the state, the California Motor Car Dealers Assn. found that in the second quarter, Toyota-brand cars and trucks accounted for 23.4% of all sales, followed by Honda at 12.4%.

The strong performance of the Japanese brands put them ahead of overall U.S. market leaders General Motors Corp. and Ford Motor Co. The Ford brand was third in California in the second quarter, with a 9.6% share, and GM's Chevrolet followed at 8.2%.

Add Toyota Motor Corp.'s Lexus luxury brand to the tally and its April-to-June share of the California market rises to a dominating 27%.

Six foreign nameplates - Toyota, Honda, Nissan, BMW, Mercedes-Benz and Lexus - accounted for 53.8% of the new passenger vehicles sold in the state in the second quarter.

This one's for you, Fixer:

Ford's full-size F-150 pickup, however, remained the leading model in the state, accounting for 3.9% of sales in the first half, and five of the top 10 models were pickups or big SUVs - a testament to California's love affair with trucks, regardless of what's happening at the gas pump.

None of this comes as any surprise to me. We've had our Tacoma for a little over a year now and we're still in love with it. The gas mileage isn't stupendous - real world 16/20, but in comparison with the Dakota at at 13/18, it's better. The Tacoma is faster, more comfortable, and loaded with features. F'rinstance, the passenger seat weighs the passenger so it won't set the air bag on "stun" if there's a kid in it.

Also, it has three, count 'em - three, odometers, one of which is used to turn off the "maintenance required" light, which is an oil change reminder every 4500 miles. We don't go that long between changes, so I had to learn how to turn the light off (read your owner's manual. Duh.).

I can lock the doors from inside my house. Handy.

My neighbor Joe, an old Dodge man like me, even bought a Tundra. I think he likes it, but all he'll say when I ask him is "It's not a Dodge". His lovely bride of 45 years snitched him off, though.

Mrs. G calls our truck "Ruby" because of its color. I call it "Recon Ruby" because it's swift and silent. My one beef about it is, it's so quiet I can't hear it coming. You can hear the tire noise, but not the engine. My dogs don't even alert to it until they hear the door close in the driveway twenty feet away. If the exhaust system ever rots away, I'll fix that. The Dakota has a "big American V-8" rumble you can hear a block away.

Even though I bought the truck in Nevada, it put Californians to work. It was assembled at an old GM factory in Fremont, so the term "Jap shit" just don't fly anymore, and nobody does that anymore, anyway. GM exported their old assembly line to China. Quite a few of the former "Big 3" cars and trucks are assembled in Canada and Mexico. "Buy American" does not mean what it used to.

Note to GM: You better wise up. Toyota's passed Ford nationwide for No. 2 and the handwriting is on the wall. It's not just Japanese graffiti. What it says is, "Too bad, so sad. Sayonara, dinosaur."
Posted by Gordon at 1:39:00 PM No comments:

It's gonna be an interesting day when PDB gets out of his Jeep, walks into the middle of the shop, and announces to me and several customers: "I don't have enough time in my life so I'm changing a few things. I've stopped taking showers and wiping my ass."

An East Coast retro car scene in the LATimes

HARTSDALE, N.Y. - Steve and Marie Michaels maneuver their black '55 Chevy with the "MOB HIT" license plate so the rear faces into the parking lot of a Carvel ice cream shop, where everyone can see the trunk's "Godfather" mural. It shows Brando as Vito Corleone, Pacino as Michael Corleone, and the guy who plays Luca Brasi, the hulking henchman who winds up sleeping with the fishes.

"Luca, he's the man," says Bronx-born Steve Michaels as he folds his cigarette pack under the left sleeve of his white T-shirt.

LiVecchi concedes that there are challenges to being car crazy in New York, as opposed to, say, California. Owners need a good garage, for starters, and can't be planning to drive in snow, ice and road salt. Of course, those indoor months give them time to work on cars such as the "Godfather" Chevy. Next on the drawing board for that one?

"You know the scene where Sonny gets killed at the toll plaza?" LiVecchi says. "We're going to do a mural of that, under the hood."

A message to the guy checking the oil, perhaps?
Posted by Gordon at 12:37:00 PM No comments:

Going on now from July 29 to August 6 is the 20th annual Hot August Nights in Reno, Nevada, not too far from me. This is more of an event than just a car show. We're talkin' poodle skirts on gals that are old enough to know better, folks.

You can read all about it at the site, and watch streaming video at KOLO-TV. Be sure to go see the band lineup.

I had a buddy named Grape who's moved away now, but he loved the old iron. He worked (and lived) at a local wrecking yard. His ride was a '55 Ford pickup with a Rocket 88 mill he found on the ground. The motor mounts were various length pieces of chain, and all the door and window handles were small vise grips, except for one window that wasn't there which he covered in duct tape in winter. It was a low rider, partly by design and partly by the old suspension pieces he used. The thing was finished in gray primer and the mufflers didn't very well. The license plates were whatever he could find with a current tag.

Obviously, this thing wasn't a candidate for the Show 'n Shine, and Grape couldn't take part in the cruising, mostly because the truck was an instant bust and he couldn't outrun the cops in downtown Reno. To its credit, Hot August Nights even had an event for this bucks-down old load in amongst all the stuff for the high dollar restorations: the burn-out contest. Grape ran real wide tires that didn't cost him anything, and that Olds could really light 'em up! He'd burn rubber 'til he ran out of gas. He had as much fun as anybody, maybe more. The crowd loved it too.

I have many funny stories about Grape. He and I were pals for years. Maybe I'll tell a few of 'em. Stay tuned.
Posted by Gordon at 11:08:00 PM No comments:

We don't work on:


I'm too old for the hassle and Harry's of the same mind. So today, the hottest fucking day of the year so far, Nunzio brings a car up to be inspected. An ancient Peugeot 405.

Me: Is that the same Frog piece of shit that caught fire on the dyno last year?

Nunzio: Yeah, I fixed it.

Me: What did I tell you last year, after I got the fire out, you crazy I-talian?

He thinks for a minute.

Nunzio, quoting me: Don't ever bring that Frog piece of shit back here ever again or I'll push it out in the street and burn it the rest of the way.

Nunzio: But the guy is a good customer. Look, he pays me to keep this thing running. I'll leave it with you.

Me: It's the hottest fucking day of the year.

Me: Fine. I hate to see a grown man beg.

Nunzio heads back to his shop (a couple blocks up the road). About a half-hour later, Harry and I strap the car down to the dyno and run it up. Four minutes on a variable speed course, ending up at about 60 mph before the test ends. It fails the first run and we have to do it again. We're almost finished with the second run, Harry bringing up the speed, and at about 50, I see smoke begin coming out from the hood seams. I move to the wall to grab the fire extinguisher, muttering 'I'm gonna kill that Ginzo bastid'.

Harry sees me move and then he sees the smoke. 'Is it on fire,' he yells, continuing to put on speed, following the test.

I look under the car and I see green fluid pouring out from underneath. 'Nah, overheating,' I yell back as the left side tank of the radiator blew off, spewing 250 degree water all over the place. Harry finishes the test as I start tossing Speedy-dry on the steaming antifreeze. Would you believe the fucking thing passed?

I dial the phone. 'Nunz, bring the wrecker, the fucking thing passed but it needs a radiator.'