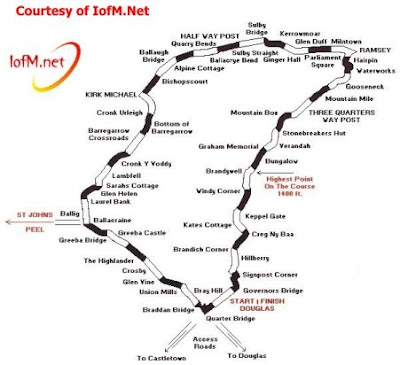 Here's a nice relaxing and scenic ride on a pair of Old Gentlemen Vincents from Ramsey south 'round the Ramsey Hairpin (1:50) and up the mountain to its highest point. The cameraman is on a '53 Black Shadow. Note the almost vertical speedometer so you can see it hit the magic Ton whilst yer chin is on the tank. Heh.

I played this one about ten times just to listen to it!

Thanks to 72degrees, UK.

I edited this from a DVD made from an old Super-8 film. Backstory here. I didn't shoot this, but I bought the movie camera and projector from Rocket Man and he threw in the reels his wife had taken. He got the moniker 'Rocket Man' before the Elton John song because he was a truck driver and used to deliver guided missiles to Cape Canaveral. You will notice he appears frequently in the vid. Helps ta sleep with the camera operator, I guess...

Credit where credit is due. The original cinematographer appears, with Rocket's mom, at :28. She did pretty good, I think, given the limitations of the home movie equipment of the time.

Me and Mrs. G appear at 2:36, and the only two seconds of video in the world of me actually riding one of the damn things in an event is at 4:26.

Riders came from all over SoCal to ride this event but most of the riders and others in the vid are from our gang from the San Fernando Valley and environs.

This is just guys and gals having fun. Enjoy.

From Super 8 shot by Elena Rocket Man at the Dirt Diggers Grand Prix at Pioneertown (or maybe Trabuco Canyon. It's been a long time.), Orange County CA in 1977. Her hubby Rocket Man's the big guy with the beard on the 750 Triumph.

To an old vet like me, K-I-A means "Killed In Action", and I've seen my share of dead Kias. That said, I love this commercial:

This one's for you, Nucks

Flattrack Racing at Northfield Ohio in 1939 See more at http://akronmchistory.yolasite.com/

I went to send Gord a picture of an old Indian Motorcycle and the link took him to a nasty, nasty place.

My bad, I thought I caught the time stamp at the bottom of the picture and instead it took him to nasty land.

Understandably, he was quite confused and didn't have a clue as to what I wanted him to see.
"No more of that" kind of response.
I finally clicked on the link I sent him and figured it out quite pronto. 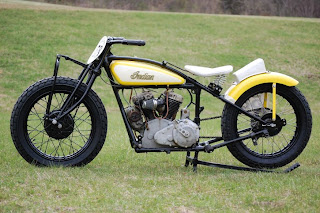 This is what I wanted you to see.

No brakes or clutch handles on the bars.
No gear shifter, and ahem, the cute little seat on the rear fender.