At the local Volvo dealership where the parts department manager brings his delivery vehicles to us to repair as opposed to having the mechanics at the dealership work on 'em? 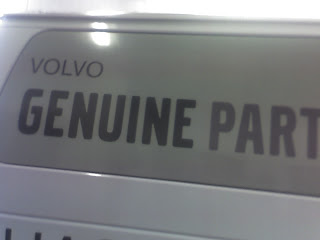 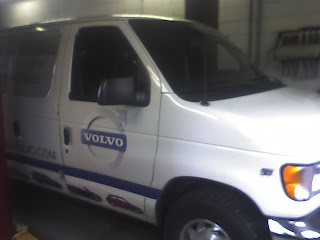 I have yet to get a satisfactory answer to that, but their checks don't bounce so I could give a shit less.
Posted by Fixer at 7:36:00 PM No comments:

It's that time of year to get all the cars out of Winter storage for their owners. Nunz and I spent Thursday morning in the barn, putting batteries in, getting them started, and then servicing each one. Lotta fun driving the old iron.

One of the original Datsun Z cars: 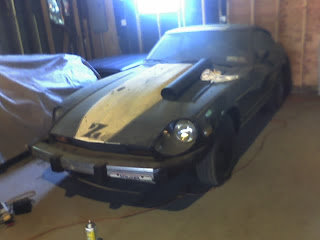 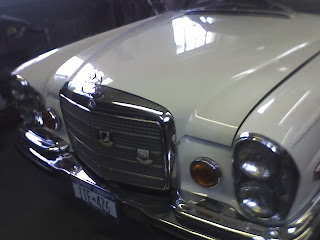 An old VW Thing. Nunzio and I want to paint it Wehrmacht gray and put a Maltese Cross on the doors. Heh ... 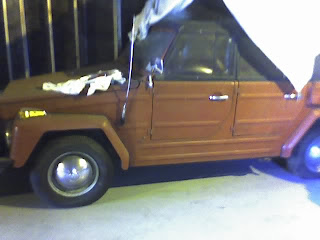 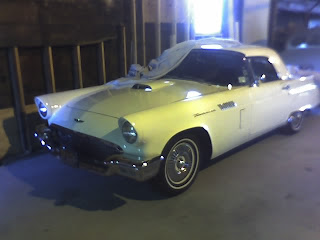 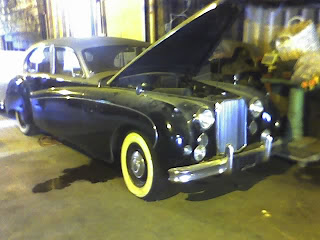 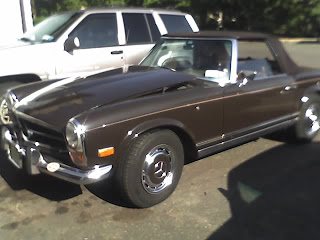 And talk about mint. This '78 Beetle is perfect: 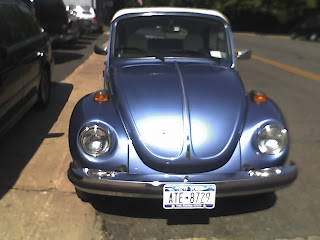 The last hotrod I built for myself was a fire breathing Camaro (454) about 20 years ago and I got rid of it when we moved in here (the guy who got it still runs it on the track) because of all the work I knew I had to do on the house (didn't have time to support a hotrod). I told Mrs. F I was gonna build us one more before I die and one of the young'uns is gonna inherit it. Well, for the last couple years I've been keeping an eye and an ear out for some classic iron that needs some help. It has to be the right car (or big pile of parts) at the right price.

I think I found it.

This is just amazing. Me want!

What you see here is a 700cc Royal Enfield V-Twin constructed using two 350cc top ends. The whole bike appears to have come from the factory, or maybe the “special vehicle operations” section, instead of the mind and work of a creative and determined owner.

When you read the story of the build, take note of the process, …he had an idea and over many years kept at it, continued learning, continued working, he just kept going until the idea became real and he was riding this bike down the road.

I was born in and lived in Delhi, India till 1999 when I came to the USA - ostensibly for a Masters in Industrial Design, but here’s the dirty truth- I came because of the sound of a Harley Davidson. Saw one once in Delhi, long ago, belonged to some filthy rich type, heard it start up and rumble away, wet myself publicly and resolved that one day, I would visit their homeland.

Yeah, them hawgs'll reach all the way to the other side of the world ta fuck ya up...

By all means go read about how he did it, but first watch this:

This one shows that Mr. Vardhan knows that when you are demonstrating a completed exhaust installation, always point it at a brick wall for maximum effect.


And the all-important road test:

[...] If you all know about the Norcroft and Carberry Enfields and are wondering why I did this anyway, well, too much time, effort and dreaming had been done when I heard of them, so inspite of some major discouragement that the enfield V twin had already been done by professionals, I decided to plough ahead anyway. NO REGRETS! Watch out for some more videos from me with info on the motor, test rides etc. coming soon!
TURN UP YOUR SPEAKERS, CRANK UP THE BASS!
Thanks for watching!

I thank him for documenting this so well. Inquiring gearheads want to know...

What Mr. Vardhan did was take the rotating and reciprocating elements from two pretty nondescript Royal Enfield single-cylinder engines and make his own crankshaft assembly and crankcase to graft them together and then get the resulting lump to fit between the wheels. It's been done before, so it's not unique in that way.

What is unique is that he did it at all. That is a tremendous amount of work. He obviously paid a lot of attention to detail and it shows. He ended up with a very nice 1930s-looking motorcycle that is his and his alone.

It'd have been nice, during this tumultuous time for the auto industry, if you'd have thought about your parts supply chain before embarking on this 'reorganization'. I have 3 Jeeps in various states of repair because I can't get parts from you and they aren't available in the aftermarket. Get yer shit together, I'm running out of room.

Cross-posted at the Brain.

The other day, me 'n Mrs. G were out shopping for a new washing machine to replace the 25-year-old wearing-out one. We just happened to run into our old friend Dave who was standing in front of his shop in the same complex as the appliance store. We hadn't seen him in quite a while, years in fact, so we stopped and chatted with him for a few moments.

I've known Dave for 28 years. He's a gearhead of the first order. When we met, he was the proprietor of Hirschdale Auto Wrecking a few miles east of town down in the Truckee River Canyon, which is no more due to environmental concerns about having a junkyard on the bank of the Truckee River. That place was a hangout in the best sense of the word! Just as an example, Dave likes guns and so do we. Let's just say that, at the wrecking yard the hills were often alive with the sound of gunfire, sometimes with the shots coming awfully close to one another in rapid succession (wink wink nudge nudge - know what I mean?). Mrs. G had just gotten a new S&W .22 revolver, and in honor of the event Dave broke out a brand new good used California Highway Patrol car door skin for her to blaze away at. Heh.

Also, I learned a lot about cars there. F'rinstance, when a customer is interested in a used engine, there's no way in the world it will ground-start unless there are a half a dozen guys standing around it and they all have a beer in their hand. But I digress...

Dave went on to be a big rig mechanic (read: a lotta 3/4 and 1 inch drive stuff) and worked for years as a mobile mechanic. The CHP has an inspection station, aka The Scales, just east of town, where they weigh big rigs and inspect them to make sure the things can get over the crest of the Sierra and down to the Valley without wrecking and closing the Interstate and killing people. I'm sure he did engine swaps on occasion, but it was mostly safety stuff like air brake systems, suspension components, tires, etc. When the CHP sidelines a rig for a safety item, it stays right there until it's fixed. Dave worked out of a well-equipped truck and fixed rigs out in the open in all kinds of weather. This is deep snow country and it was no picnic sometimes. It paid pretty well. The truckers just wanta go and they pay, believe me.

Dave got tired of that after about twenty years (I don't blame him!) and opened his own shop, A-1 Automotive (first in the phone book after all the AA Automotives).

Dave's an old biker like me, so I decided to drop by the following day and show him my Royal Enfield. We had another nice chat. I was gettin' ready to throw a leg over my ride and head out when he casually dropped the bomb: "I'm runnin' the dwarf car now..."

I had seen pictures of them and thought they looked like big fun, but I'd never seen a real live one up close. Needless to say, both legs stayed on one side of the bike and I was there another half hour while Dave showed me his car and told me a lot about it and his racing. I brought the camera the following day. Hyar 'tis: 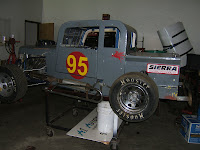 Here's Dave. I got him to pose after I reminded him he doesn't look like his 'wanted' posters any more. He had just crawled out from under a church bus after replacing a rusted-out fuel tank. Note the door. No way he'd get more than a little ways inta that thing through the window, although the visual of the Fire Department tryin' to get him back out if he tried is hilarious. While he was waiting for them he coulda sold ad space on his ass! Heh. 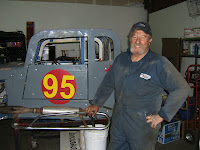 A little about the car: It runs a 1000cc (61ci) Suzuki GSX-R (Gixxer) motorcycle engine and gearbox, perhaps 160 horsepower, and redlines into the rev limiter at 12,500 RPM. This one is fuel-injected, but carbs are allowed as well. It is mounted longitudinally in the car as opposed to transversely as it would be in a bike. Drive is through a driveshaft mounted to an adapter that replaces the chain drive. There is a minimum weight requirement of 1000 pounds unladen and Dave has to run ballast to comply.

Here's a photo of the well-appointed interior. The padding on the far side covers the driveshaft tunnel. He's runnin' a Toyota rear end with one short axle and one long one. The motorcycle clutch lever is mounted to the shift lever, and he runs mostly in 3rd gear. 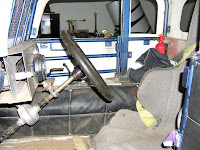 A little about the racing: Dave runs with Dwarfs At Reno-Tahoe (DART). They run at tracks mostly in northeastern California and Northern Nevada, but occasionally at tracks as far as 250 miles away. They have drivers from 14 to 78(!) years of age.

Dave is currently in 7th place in points so far this season. Pretty good, I'd say.

Go to DART's site and click 'media' and 'photos' for many good racing photos.

Here's an interesting point: Track operators love these guys. When the Dwarfs come to race, attendance goes up 25%. I believe it. I bet these things are a lot of fun to watch, and I'm planning to go spectate one of their races this season.

Below is Dave's car runnin' a Polish victory lap with its previous owner. I'd love to be there when Dave gets to do this:

I took a printed copy of this post and the photos to Dave. He said if anyone would like to cough up some sponsorship money to call him at the number at the A-1 Automotive link. Tell him Gordon sent ya. Now there's a real racer! Heh.
Posted by Gordon at 12:24:00 PM No comments:

"Let me borrow the car tonight."

So, dad lets the kid take the car this weekend. This car: 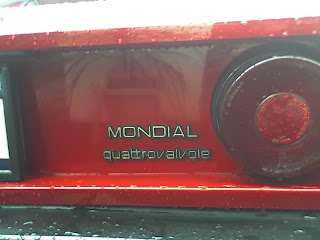 This is how I got it this morning. 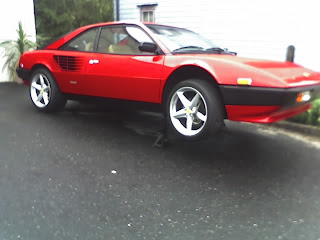 What, you say, you didn't know Ferraris came with 4-wheel steering? They don't. This is the left rear wheel. 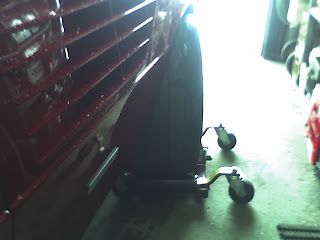 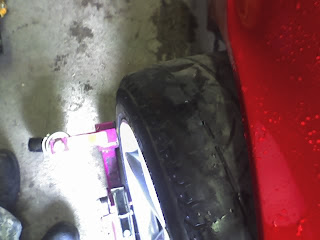 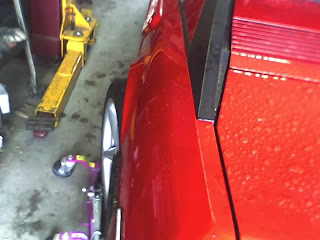 Got the wheel off and found the brake was the only thing holding the wheel on. The kid twisted the axle hub clean off. Shouldn'ta dumped the clutch at 8 grand. Heh ... 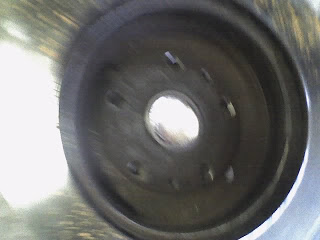 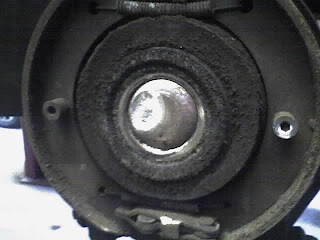 Got the new spindle and stub axle assembly from Torino and the thing is back to sitting on the ground. The customer will pick it up this afternoon. The bill didn't quite crack 5 figures. Heh ...
Posted by Fixer at 7:34:00 PM No comments: