I'm just back from rescuing collecting my new Royal Enfield from Burbank. More about the bike in a few days. During its inexorable progress from Larry to my garage, it was stashed at my old friend Lonnie Martin's house. It was a real treat for me'n Mrs. G to get an altogether too brief visit with him and Larry as we haven't seen either one of them in person for probably 20+ years, so I decided to tell you a little about Lonnie.

I met Lonnie at a TT Scrambles/Flattrack race at Adelanto CA in about 1973. It didn't take long to find out we lived less than a mile apart in Burbank and we became friends. He sponsored me for membership in a dirt riding club, which will remain nameless until I get permission from them to out them, and we spent years going racing together, often in the same truck. We were friends, but once on the track, all bets are off, as in "Try ta put a wheel inside me, willya m*****f*****? Watch this!" (sound of door slamming). We rode clean, but we rode as hard as we could. Lonnie just about always beat me. Who cares? It's fun!

There's also the wee possibility that we partied a little as well. Some stories are best left untold...

The Martins are one of Southern California's first families of motorcycling and Lonnie has been a motorcyclist since the day he was born. His first words were probably 'vroom-vroom!'. His late Dad was the Triumph and Vincent dealer in Burbank for many years and Lonnie grew up in the shop. He thought an oil can was a squirt gun, and ended up nailed into a motorcycle crate all day once because of it.

His Dad was also the inventor of the Martin Swinging Arm for rigid-framed Triumphs long before swingarms came stock, the Martin Roadrunner (scroll down) Whizzer-based bike, and the high-quality Martin Motorcycle Lift, an in-floor air-over-oil device. They haven't been built for probably thirty years, but I'll bet there's a lot of them still in service. They were in use in several motorcycle shops I've worked in and I own one personally.

Photo from Lonnie's collection. Caption from Triumph Motorcycles In America by Lindsay Brooke and David Gaylin.

Lonnie says his biggest contribution to that effort was he got to help push-start it. Hey, that's what kids are for, ain't it?

Lonnie started racing at an early age, back when there weren't classes for kids. He raced against the big guys. Beat 'em a lot, too. The first time I visited his digs, I never saw so many trophies in one place! Sadly, most of them were destroyed a few years back in a fire in his storage shed.

This next photo was taken in the mid-'70s. Now, he gave me my choice of photos from his extensive collection and was a little puzzled why I wanted this particular one. He has photos of himself way more crossed up and exciting than this one. Here's why: anybody can get full-lock sideways turning left because that's the way oval track races are run. This photo was taken during a TT Scrambles race which has both small right and large left turns, and shows him turning right, steering with the throttle and rear wheel at speed with his feet up. You can't see the smoke comin' out of his ears because of the helmet, but his body language shows the concentration and determination that makes him a winner. The only way this pic could have been better is if it was in color, 'cuz that was the prettiest racing 500 Triumph there ever was. This is motorcycle art, folks. 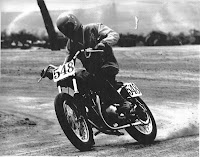 His racing success did not come painlessly. He told me a funny (now, not then, heh.) story about reporting for jury duty a little while back. He couldn't get through the metal detector because of all the screws holding his arm together, and ended up surrounded by the rent-a-cops that man those things at the L.A. courthouse. It didn't quite happen, but I get this funny visual of him standin' there nekkid, going "but...but...but...".

The next one was taken this past weekend. Lonnie doesn't like his picture taken unless he's at speed on two wheels, and he didn't want to pose for me. About the only person who can get him to do anything is Mrs. G as they are great friends as well. He is either looking at her as if to ask, "Am I doin' OK? Huh? Huh?", or using his lightning reflexes to fuck up my shot just as he saw my finger move on the button, the prick. (Clever way to blame him instead of myself for not watching what I was doing, no?)

The bike is an early KTM 500 single, almost thirty years old, and runs and looks like it just came off the showroom floor. He takes good care of his shit. 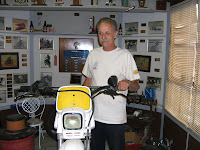 These days, Lonnie is involved in the Southern California Timing Association (SCTA), which is the Sanctioning Body for Land Speed Racing speed trials at El Mirage and Muroc dry lakes in the Mojave Desert near Edwards AFB, and the Bonneville Nationals. He is the El Mirage Liaison with the BLM. Once a racer, always a racer, in whatever capacity.

That's about it for now. One thing our visit taught me is that we're not going to go this long between visits again.
Posted by Gordon at 12:30:00 PM 3 comments:

I decided to do something a little spectacular for F&G's 4th birthday. Here's some action scenes of one of the coolest airplanes ever built from "Murphy's War". More info here.

Murphy learns how to fly the plane in the most daring way, getting it out on the choppy waters of the river and discovering how the controls work by trial and error. This extensive flying scene involves lots of shots of the floatplane veering sharply to avoid buildings, the jungle and stalling.

My kinda guy! There wasn't even anybody for him to ask, "Where's the gas an' clutch?"

Happy Birthday to us!

Today marks the 4th anniversary of this blog. Seems like just yesterday when we began this page. Thanks to all the readers and commenters who stop by and especially thanks to Gord and Nucks, who've helped to give F&G it's personality.
Posted by Fixer at 5:04:00 AM No comments:

Pasted on the lift: 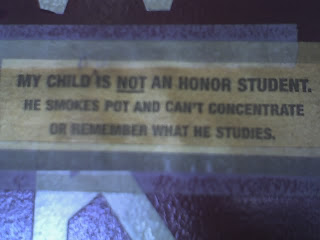 *Part of an ongoing, semi-regular series. Shitty pic thanks to my cell phone camera.

This is what happens when you get your signs printed in China because it's cheaper...

On the other hand, their customers will never notice...(ducks!)
Posted by Gordon at 2:22:00 PM No comments:

How To Tell Fixer is On A Test Drive 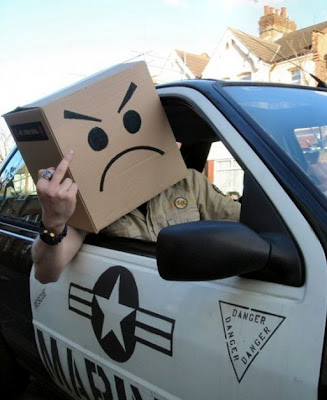 Since most of our snow has gone wherever snow goes in the Spring, me'n Mrs. G are making plans to go to L.A. in a coupla weeks and collect my new motorcycle. Backstory here.

Just for fun, I typed in 'Royal Enfield' at YouTube. That killed a coupla hours, and I found this TV road test. The bike they tested is nearly identical to mine, the differences being that mine is a different color (red & chrome) and has no electric starter. Larry, my old pal from whom I bought it, says that with 6.5:1 compression it'll start if ya sneeze on it. I'm sure Enfield put the 'electric leg' on to entice folks to buy these jets who have heard the apocryphal (if sometimes true - I won't go into the peculiarities of mechanical and manual ignition advance systems here) stories of getting flung over the handlebars whilst kickstarting large displacement one-lungers. Folks today want most of the retro-bike experience.

Just as an afterthought, go see this Asian Royal Enfield commercial. They'd never get away with that in this country!
Posted by Gordon at 1:36:00 PM No comments:

This just shows that you can have fun with anything with a motor and wheels!

It figures that any event involving these rigs would have to be multi-day.

Hmmmm, lemme see now - A motorized gang of Irishmen heading for a pub. I wanta see the video from the return run! Them ol' boys're likely to be plowin' some mighty odd places...

I realize this is addicting, so there's more of these here. Thanks to Yellowlabrador.
Posted by Gordon at 1:46:00 PM No comments:

Big Brother Is Watching You, Much Closer Than You Think

Get a load of this.

They already have cameras all over every major city and even some highways.

Bush just turned our own spy satellites on us, on top of tapping all of our web surfing and Emails they intercept.

My Dad sent me this video and I JUST FELT A CHILL RUN DOWN MY SPINE.

Notice that this was filmed in Canada, also notice at the very end how he says it is going to revolutionize police work ALL OVER NORTH AMERICA!

Nowhere to run to, nowhere to hide.

Cross posted @ Ornery Bastard
Posted by Phil at 1:14:00 AM No comments:

Get Rid of The Training Wheels, Gord.

It's not like this a new idea, kinda, these things have been around a long time.
I think that the fold up rotor and being able to drive it down the road is what makes this unique.