"Publish and be damned!"

My old pal Gary was the one who told me that Morgan was resurrecting (carefully chosen word) their 3-wheeler (see post below) so naturally I sent him a link to F& G.

I've known Gary since the late '70s when I was National Service Manager (grand title, little horsepower) at Triumph Motorcycles America, the factory-owned distributor. Gary was one of a team of fitters that came over from England to rectify a rear brake master cylinder problem by replacing them in the crates before the bikes went to dealers. One of the cylinders had failed in use as a clutch cylinder in some kinda Limey car or other and I think their lawyers panicked. Anyway, due to the new cylinders arriving in dribs and drabs, Gary and his partner John were in SoCal for about four months. Perhaps Gary will see this and tell me how many units they replaced, but it wasn't very many. I think the English term for that poorly planned flusterpluck would be "a right bloody cock-up".

During that time, me and my motersickle club buds rescued these guys from sheer boredom several times and took them out to the desert and other places, made 'em desert BBQ and such as that. The club called them "the blokes from Triumph". We were all Triumph riders anyway so they were a big hit and we've been friends ever since.

Gary emigrated to Oz several years ago and is the dealer liaison for the Australian Triumph distributor.

His response to F & G was so good that I asked him if he minded if I posted it. His reply to that is the title of the post. Thanks for the one, way ahead of you on the other, mate.

Hey Gordon – Thanks for the link.

The George Formby film 'No Limit’ is one of my favourites still. It’s a tale of the battling little man beating adversity. Freeze frame one of the mainstand shots and look at the flags of all nations .What looks like an IOM three legged flag is actually a swastika! This was probably one of the last outings for the glorious Socialist Germany before the little altercation.

The pub he crashed into is now a gift shop. The beer on the IOM is an acquired taste – always reminded me of cat piss.

The Catalina races were something else – all BSA’s and Triumphs – do you remember me riding that Pink TRIUMPH twin in Bean Canyon? it reminded me of that! Of course the best racing was always pre-legislation!

I took the opportunity to tell him that yes, I remembered how good he looked on Triumph Lady's pink TR6 desert sled and that I still have photos and my pension could stand a little augmentation...

And I won't fault him for missing the odd Matchless and Velocette in that 50+ year old clip (three posts below). Heh.

His insight on 'No Limit' (two posts below) is great!

And yes, the best of everything was before the anti-fun people found out about it.
Posted by Gordon at 6:53:00 PM No comments:

If ya don't want to listen to Mr. Morgan, the great unveiling is at about 4:00.

The piece has an S&S V-Twin and a Mazda 5-speed+reverse. It is expected to cost around $40Large. More info here.

Charles Morgan reveals the new Morgan 3 Wheeler at the Geneva Motor Show. Open to the public until 13th March 2011.

I couldn't find any video of the new one at speed, so here's a slightly older model:

And when I get one, I won't even have to start it myself! Mrs. G has been ready for the day since she started this one 35 years ago. At least I think it started: 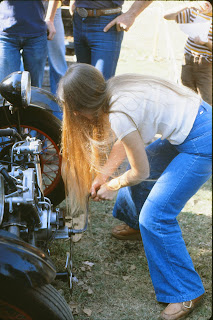 I just gotta get a DVD of this. Hell, it parallels my own life/racing career (including the 'creative financing/sponsorship'. Heh.) so closely I could probably make it myself!

Here's the setup. There's a golden comedy line in this that I couldn't read 'til I full-screened it. George is a Rainbow man and gets a letter back from the Rainbow Cycle Company Ltd. telling him thanks but no thanks for a spot on their racing team but "we wish you success on your reconditioned 1925 Rainbow motor cycle". Best o' luck on that old crapcan we sold you, chump. To me that's priceless.

Here's the obligatory (around here anyway) cruise ship scene on the way to IoM:

Here's the payoff - the Isle of Man TT race, filmed on location on the Isle of Man. TT aficionados will recognize some famous landmarks such as the Ramsey Hairpin, the famous jump at Ballaugh Bridge, and others including a particular pub that's probably had more motorcycles through the front door than any biker bar in Sturgis. Heh. Try some of this stuff on modern racebikes and you'd have many expensive lumps o' shit and a lousy movie. There's something to be said for old-fashioned simple iron and steel motorcycles.

This puts a lot of modern comedy chase scenes to shame. I musta learned to ride by watching this in the cradle...

There was a Catalina Grand Prix held on the SoCal island for several years back in the '50s. After a 52 year hiatus, there was one last year. This is huge to us old SoCal riders, operative word being 'old'.

A legendary event that had been nothing more than a faint memory for a select few, a tall tale for others and a history lesson learned through photos and 8mm film for most was about to repeat itself. We speak of a post-war race that took place 22 miles off the coast of Southern California on a small island called Catalina. This quaint little mound of terra firma in view from downtown Los Angeles on a clear day has been a small venture with vast history-including military training in the '40s, spring training for the Chicago Cubs Baseball team from the '20s to early '50s and the epic golden years of the Catalina Grand Prix in the '50s. 1958 marked the last year of the then legendary and world famous race and its hallowed ground lay dormant for 52 years before a miracle took place.

There's a good article in Cycle World too, which I just got in the mail yesterday.

Interesting tidbit: Even though there's an ocean between Catalina and L.A., it's the closest place to have a race these days.

Here's what it looked like in the old days:

Here's the recent one:

Cycle World Off-Road Editor Ryan Dudek gives us an onboard view of the Red Bull Catalina Grand Prix course on his way to victory in the Veteran Heavyweight A race.

Notice that not only are there no bikes in front of him, there's almost no bikes visible behind him on the switchbacks either. Mr. Dudek was haulin' the mail.

Note to Dudek: Next time put a camera facing to the rear. I'd love to see what the rear end is doing! I betcha he got that Katoom so crossed-up a coupla times he'da got pictures of his face!

Note: you may wish to take a seasick pill before viewing. Also, Mr. Dudek crammed a 5-mile lap into the ten minute YouTube limit. If I had done the same video, crossin' the line would have been in Part 3. Okay, okay, part 6. Heh.