In one of the most entertaining reviews of a car in recent memory,writer Dan Neil
takes the new Lexus hot rod out for a spin, I'll let you see what he thinks, strike that, I HAVE to tease you with one piece first;

The car also sings. The IS-F is equipped with an eight-speed automatic transmission, in which the gear ratio intervals are very evenly spaced. Eight speeds happen to correlate to eight notes of the diatonic scale -- do, re, mi, etc. If you hold the throttle and speed steady, and you shift up and down with the shifter paddles, you can actually coax simple melodies out of the stacked-pipe quad exhaust, for instance, "Twinkle, Twinkle, Little Star." And, yes, I get paid for this. 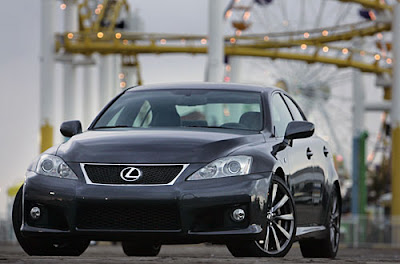