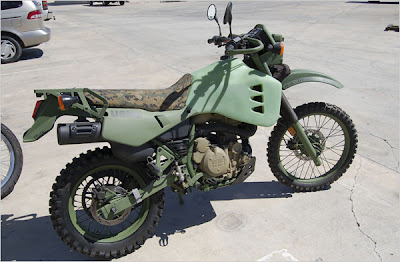 The Marines have one now.

The following article is from the New York Times, written by Dexter Ford.

I clipped a little more than I really wanted to but I also left quite a bit of relevant information there so please go read the whole thing.

Other American and NATO military machines, from diesel generators to stealth bombers, run on JP-8 to simplify fuel supply logistics. While JP-8, a formulation of jet fuel similar to kerosene and diesel fuel, works fine in those engines, commercially available motorcycles require gasoline.

That situation presented an opportunity for Fred Hayes, chief executive of Hayes Diversified Technologies, a military contractor in Hesperia, Calif., that has built specially adapted motorcycles for the Marines and the Army Special Forces for more than two decades. The bikes are modified to run in the harshest environments on earth with special lighting and more rugged suspensions and tires.

When the Marines requested a motorcycle that would run on JP-8, other military contractors proposed outlandish turbine-powered machines. But the Marines wanted a bike that would actually work, and soon, at a reasonable cost. Hayes won the contract.

The resulting HDT M103M1 uses the chassis, a few engine components and all the internal transmission parts of the Kawasaki KLR650, a workhorse capable of anything from daily commuting to Sahara exploring. But the Marine machine’s major engine components are all new, built for diesel service.

The difference was apparent the instant I thumbed the starter button. In place of the gasoline-powered KLR’s anxious idle, the Marine machine came to life with the low clatter of a London taxi.

In contrast to a gasoline engine, which responds instantly to the throttle, a blip of the twist grip resulted in — well, not much. It took a good three seconds for anything significant to happen.

On a half-hour test ride, the M103M1, though sluggish at first, gathered speed with dogged insistence. The footpegs and handlebars buzz as the engine revs — the counterbalancer that controls vibration in the stock KLR has been omitted to save weight and reduce complexity. Shifting through the five-speed gearbox gets the M103M1 past 90 miles an hour, a speed it will hold, apparently, until the end of time.

One of the great advantages of the M103M1’s diesel engine is its efficiency. At a steady 55 m.p.h. it gets 96 miles a gallon, according to Hayes, about twice the mileage of the gasoline engine.

This is really pretty damn cool, when the production starts keeping up with demand these things are going to be all over the world.
Looking at the size of the fuel tank I am guessing this thing will go at least 500 miles on a tank of fuel.
Posted by Phil at 3:24:00 PM