Just got back from the 18th Annual Cannibal Cruise held at Truckee Regional Park about three blocks from home. Here's some photos and an observation or two. Click photos to emhugen.

A very nice Z28, but no matter how innocently folks do stuff, sometimes it can't help but make me feel older than dirt: 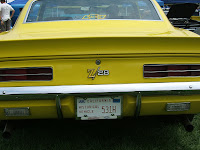 Mrs. G gets all nostalgic next to a '55 Chevy 2-door sedan. Her first car was one of these: A '54 Hudson Hornet with Twin H-Power dual one-barrel setup. The things they'd do to get more power out of a flathead 6! Beautiful. Those things won a lot of races against larger displacement cars. 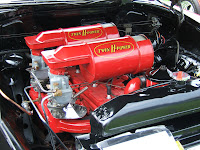 A funny display. The dummy was missing a shoe. A gal put the shoe back on it and said, "This is like takin' care of a drunk." Just then the dummy fell over and the four or five folks standing around just nodded. Heh. 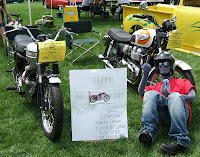 Nice '64 single-carb Triumph 40-incher. My only thought was I wondered how much of what kind of goop did he use to fill in the sidewall cracks on those ancient Dunlop K70 tires. Amazingly, they still make them for vintage applications. 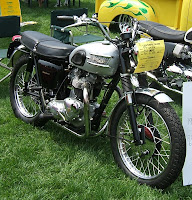 A '54 Marketeer. An idea whose time has come again. This is how I'd fix mine up! Check out the 'apes'. Heh. Probably won't go fast enough for the streamers to beat yer elbows to death. Notice it's still on its original tires. 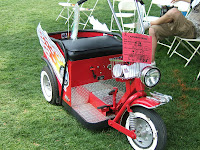 I can't leave out the Blue Oval boys who populate this joint, so I saved the best for last. Very pretty '51 Ford convertible. Notice the standard Ford feature - the hood's up... 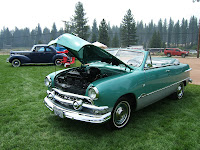 Me'n Mrs. G rode the Royal Enfield down to the show. I had to use extra throttle to get it to move with her on the back. She noticed it and cracked up because I didn't dare say anything...
Posted by Gordon at 4:30:00 PM