Almost eleven years ago, a Hurculean effort of unheard of proportions culminated with a Land Speed Record at the Bonneville Salt Flats . 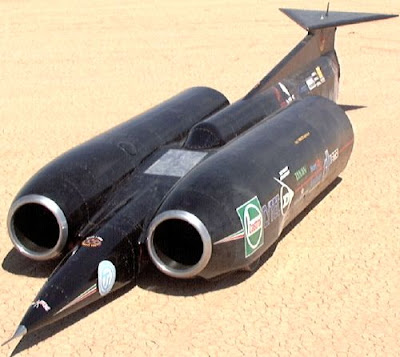 This "vehicle" broke the sound barrier, without ever leaving the ground, doing 763.035 MPH .
A feat that has yet to be repeated.

I am going to link to the site I got these images from because I want you to go read the incredible story behind this accomplishment, such as the little known fact that it is one of the first success stories where the internet helped to spread the word about an incredible project where it not only helped to find a driver for it but had school children donating money to pay for the fuel to test it, estimated at 250,000 gallons. 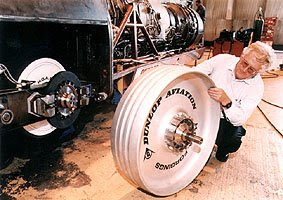 That aluminum wheel was designed to withstand 35 G's!
Also developed with a computer. 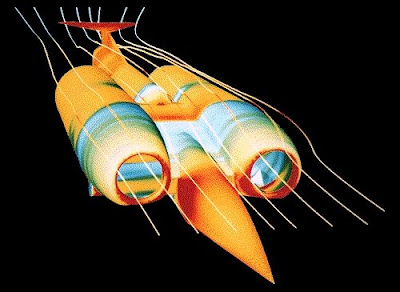 that is an image from a Cray computer that was used with Aviation programs to help design the ThrustSSC.

The whole, incredible story can be found here, one of my favorite parts was what the criteria was for being considered to drive this monster;

A competitive selection process took place to see who would drive the fastest car ever built. But rather than advertise for people to apply, he simply allowed the message to spread, thereby providing the applicants with their first test — their own initiative.

Thirty people applied. All of them were either drag racers or pilots. At the Center of Human Sciences in Farnborough, Professor Roger Green provided help with the project:

"What we had to do was decide how to whittle this down further. The most obvious thing to do was to give them all a sanity test and take the ones who failed. But one Richard Noble is obviously quite enough already."

Crazy with a death wish, no one knew what an effect a sonic boom would have on a car mere inches off the ground traveling at over 700 miles an hour!

It is a fascinating read and I highly recommend taking a bit of time to read it!
Posted by Phil at 12:16:00 AM