As you know, before I left Harry's, I had no plans to return to the car business professionally.

That said, I sold my toolbox when I left so I wouldn't have to schlep it home. I didn't sell the tools, just the box. It was a Mac Tools roller and top that I've had forever and I got $500 for it. Good deal.

Well, since August, things have changed as you well know. So now that I've been working for Nunzio for the last few months, and our plans for Dad-in-law Fixer have changed (over the past 6 weeks, his Alzheimer's has gotten worse and it's beyond our capabilities to care for him, needing constant supervision now), I'm in need of a toolbox again.

While I first considered getting one from one of the tool guys (Snap-On or Mac), I was loath to pay the kind of money they wanted for something I'd need for 5 years (I gave Nunz a 5 year commitment and then I'm done with this fucking business). Coincidentally, Nunzio's wife and kids bought him a new toolbox for Christmas from a company called International Tool Boxes. It's a huge thing the size of an apartment complex and cost less than $2000, while made just as ruggedly as one from the 'majors' that would go for $10,000. I was impressed, so I bought one (smaller) from them myself.

This setup cost me a little over $1600 and the side cabinet was free, along with the shipping (truck freight). 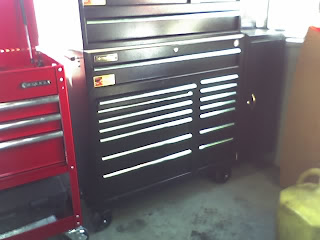 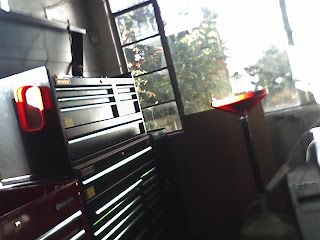 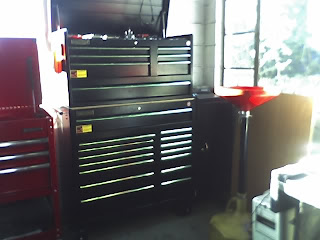 Hey, times are hard and if I can get something the same quality of Snap-on for a fifth of the price, I'm gonna take it.
Posted by Fixer at 5:20:00 AM