Saved By The Bell

I don't know, would you pay a quarter of a million dollars for a forty five year old rust bucket Pontiac Tempest?
No motor, no transmission but it has Plexiglass windows and is one of only six ever built, I guess that makes it just a little bit rare. 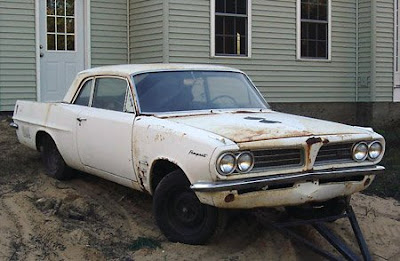 Quite the amazing story behind the final price tag for this old factory produced drag racer!

The eBay auction for this 1963 Pontiac LeMans Tempest started out innocently enough. Obtained after owner died. Appears to have original interior but no motor, no transmission. Body has a little rust and some dents. There's stuff in the trunk, but no key to open it. Opening bid nine days ago was a mere $500. After one week, eBay seller 123ecklin will pocket $226,521 before auction fees. What happened between Day 1 and Day 9 is an amazing story.

The car's plexiglass windows, unusual suspension setup and a dash plate bearing the name of a racetrack tipped the owner to its racing history. But what he didn't know is that the car is one of only six 1963 Pontiac LeMans Tempest Super Duty coupes ever made. Hemmings recently did a story on the rare cars in which they listed all ever built. This one looks to have been driven by Stan Antlocer and was the fastest drag car in 1963 before disappearing.

There is a little more of the history behind this story here.

I think it is awesome that someone recognized the cars provinance and history, I do think a quarter of a million as is was a bit steep though.
I am tickled that this rare race beast now has the chance to be restored, it is part of an under told part of the Factory wars in the early Sixties.

Hat Tip to Fark for finding this story and publishing it.
Posted by Phil at 10:20:00 PM