And a spin down Memory Lane as well. Found this at The Kneeslider: 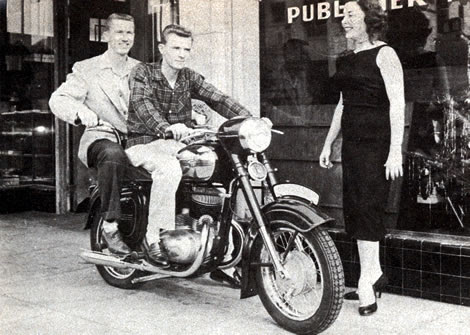 Yes, we’ve come a long way with motorcycle rider training and safety courses. I was digging through The Kneeslider research library and came across this Jawa training motorcycle in an old issue of Cycle. It was powered by a 250cc 2 stroke engine and had complete dual controls. The instructor sits in back and has fully functioning handlebars connected by rods to the front fork with a throttle, front brake lever and clutch. He had a rear brake pedal and footshift for the 4 speed transmission and there was also an ignition cutoff.

That had to be an odd experience for both student and instructor. I wonder how many of these they sold.

Not many. I actually remember these things, and I could be wrong, but I think there were two of them. The other one is probably still in its crate somewhere.

From memory, the photo was taken on the sidewalk (Great place to learn how to ride a motorcycle! Could (and has. Heh.) come in handy...) in front of Clymer Publications on Alvarado St. in L.A. to where I pedalled my bicycle every Saturday when I got my allowance to buy back issues of Cycle. The lady is Cycle staffer Carol Sims, and the guy on the front seat is another Cycle staffer whose name escapes me, although I will probably remember it at 3 AM and sit bolt upright in bed. The grinning gent on the back seat is Jack Snyder, at the time the general manager of Cycle Imports, the JAWA importer on La Brea Ave., and later the sales manager at Bud Ekins Motorcycles from whom I bought my brand new '69 Triumph Tiger. Nice guy. A coupla years later, Jack gave me my first job in the motorcycle industry, also at Ekins' shop. I remember that he brewed his own draft beer and had a tap in his den.

I did a little more digging and found this page from Motorcyclist:

Still Jack on the back, but in front is Clark Atkinson, a friend and schoolmate who already knew how to ride but just happened to be at Cycle Imports when they needed a photo. The blame, or credit, for my love of motorcycling is all on him, as he gave me my very first ride on a motorcycle on his own 175cc JAWA circa when the above photos were taken. I haven't seen him in forty years, but the bike thing has kinda stuck.
Posted by Gordon at 3:00:00 PM

Thanks for taking the time to discuss this, I feel strongly about it and love learning more on this topic. If possible, as you gain expertise, would you mind updating your blog with extra information? It is extremely helpful for me. vespa scooters