Me'n Mrs. G had a terrific weekend. Tipped off in advance by my old friend Steve, owner of Storz Performance, we went up to Donner Ski Ranch to visit and to watch him and his sons ride a trial sponsored by Sacramento PITS, the premier NorCal-based trials club. An explanation of Motorcycle Trials here.

'The Ranch' aka 'The Granite Patch', is about ten miles from home. We rode our bikes up there on Saturday morning. The 'sections' are laid out in a loop over a coupla miles so we just hiked up to the nearest one to the parking lot. At our age and that altitude (7200'), we deemed that sufficient exercise. I took this photo on Sunday of the trail we hiked up on Saturday. You can see our bikes in the upper parking lot. On Saturday, we were parked in the much larger parking lot and pit area beyond the ski lodge in the center. Camera-shy Mrs. G saw me pointing the machine in her direction and scampered behind the tree on the left. Heh. Although resembling a trials section, this is actually access between sections. This is gnarly country, folks. 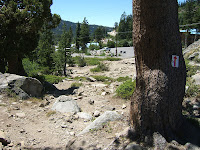 The Saturday event was for Vintage bikes (and riders. Heh) and Beginners. Steve finished the section and hollered at me, "This is the sport for you, Gordon". More on this later.

Steve invited us for burgers. We decided to go home for a coupla hours and come back up in the pickup on the theory that a) it gets cold up there when the sun goes down and, b) in our tourist area, after the sun goes down, every driver is drunk.

We got home in time to watch a little of the NASCAR Nationwide series roadracing in the rain in Montreal. First time I've seen windshield wipers on stock cars, although some of them lifted off at speed. Best NASCAR race I've seen in years! They should water Daytona... Then a few minutes of an unlimited-class motorcycle hillclimb. 200hp bikes going straight up! Sometimes over backwards, too.

I called Steve to ask what I could bring for dinner, and what kind of pie he liked. His answer, and I'm not making this up, was "Oooh! Chocolate cream pie! And bring some burgers...". Come for burgers, and oh yeah, bring some burgers. I love that guy!

We had a nice dinner and a good visit. We watched a little extreme-o-cross bike action on the TV in Steve's motorcondo. One guy did a handstand on the bars about ten feet up in the air. I said, "I've done that", to which Steve replied, "Not on purpose, I bet". Well, no...

Rode the bikes back up to the Ranch on Sunday. This was the regular event for Intermediate and Expert riders, and Steve and his sons Neil and Eric all rode. There were a coupla former National Champions there, and they were absolutely amazing to watch. Here's Steve after his first loop: 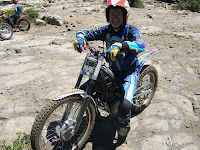 After his second loop, Steve was noticeably more tired and called it a day. 10 sections per loop and it isn't as easy as it looks. The trial was scored on 'best 2 out of 3' loops, so Steve had completed the event. His comment was, "Remember how we used to thrill ourselves at 80 miles an hour? Well, now we can do it at two miles an hour!"

His sons, 16 and 18 years of age, are really good at this sport, and have competed as far away as East Tennessee. I outsmarted myself by preemptively changing the batteries in my camera and installing bunk ones, so I apologize to them and you for no pictures of them.

Steve had gotten me thinking with his "This is the sport for you" comment, and I bit the hook by accepting his offer to ride his fantastic Sherco around. Grrr. It took me about ten seconds to fall in love with the damn thing. Here, kid, the first one's free...

Steve's an old Pommy single man like me, so in retaliation I made him clatter up and down the road on my Enfield. He got me better than I got him.

This is a great motorcycle sport for old farts like me. Low speeds, no handlebar-to-handlebar action so less chance of an ER visit (we heal a lot slower than we used to), ride at your own pace, and a relatively low investment in equipment. Also, PITS puts on several events each year within an hour's drive from my home. Feel sumthin' tuggin' atcher lip, old man?

Now, a new $6Large bike is out of the question, but I've got a garage full of old iron, of which several of whom could easily be converted for a casual fling at trials, perfect for a Vintage Beginner like myself. Then I remembered that I have an actual vintage trials bike that I took in payment for a $25 debt about 20 years ago. It's a Honda TL125. I had to dig, almost literally, around in my back yard for it, but here it is: 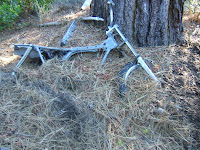 It's not as bad as it looks. I have the rest of it except for the rear axle and sprocket, and a few (we'll see!!!) minor mostly proprietary items. Funny story: I had this thing hanging from the ceiling of my motorcycle shop. One day a guy came in needing a rear sprocket for one of these but not really expecting to find one in a podunk 'sickle shop like mine. I smiled and said something like "we need only look to a higher place to fulfill your desires" and pointed up. Sold him the sprocket for 60 bucks, which was half the price from Honda dealers. I get the feeling that one's gonna come back and bite me on the ass...

More on all this happy horseshit as it develops, but I think I got a little winter project.

As a special added feature, here's part one of a two-part video on a PITS trial just south of Lake Tahoe, along with some very good commentary about the sport of trials. The Lewisport folks were at the Ranch as well. Please enjoy. Part two is here.