It looks like a sci-fi,steroid enhanced tadpole to me but you gotta know it's fast. A 450 HP, 3 rotor Mazda rotary engine decked out in Le Mans finery.
Take a close look at the nose and sides and tell me they didn't spend a ton of time in a wind tunnel with this thing.
This is a proto type, and they are famous at the American Le Mans series for using state of the art engineering and aerodynamics to try and edge out the competition for bragging rights.
Here is a quote from the article;

"Furai takes Mazda's unique Nagare (Japanese for "flow") design language a step further as it is translated into a concept car based on an American Le Mans Series (ALMS) racing car. The car utilizes the Courage C65 chassis the company campaigned in the ALMS series only two seasons ago, and the 450-hp three-rotor rotary engine that distinguishes it from anything else on the track." 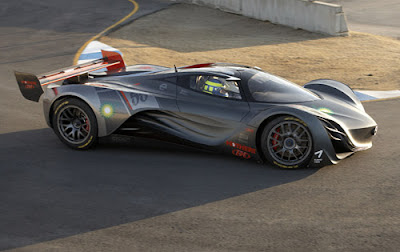 "Flow" certainly comes to mind when looking at the aero styling on the front of the thing.

Original article here, where I also got the pictures.
Posted by Phil at 3:23:00 PM